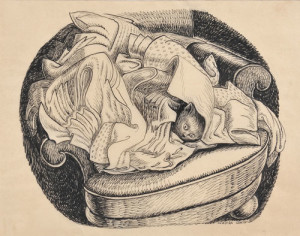 At Skinner on May 13th bidders can acquire a wonderful drawing of a cat by Wanda Gag in our Fine Paintings & Sculpture auction. The ink drawing (Lot 342) shows a wide-eyed kitten peeking out from a jumble of laundry on an overstuffed arm chair. Wanda Gag is known to many as the author of Millions of Cats. Published in 1928, the fanciful illustrations and rhythmic language have delighted generations of children. Gag grew up in rural Minnesota, the child of an artist.  She studied at the Minneapolis School of Art and the Art Students League in New York. Gag enjoyed a career as an author and illustrator of children’s books and as a printmaker. 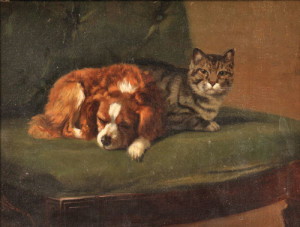 Also offered May 13th is another painting of a cat, this time curled up beside a dog, by John Henry Dolph  (Lot 267).  While the Spaniel pup continues to doze, the cat, still somewhat sleepy,  lifts its head and looks out at the artist and at us. As a young artist, Dolph had trouble finding a consistent market for his landscapes and genre scenes. He discovered, however, that paintings of cats and dogs, at which he excelled, found eager buyers.  He went on to devote himself exclusively to paintings of animals, earning the informal title of the leading cat painter in America. 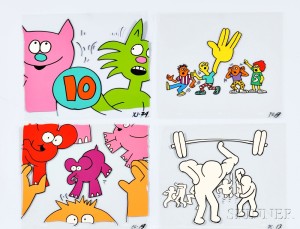 Colorful cats and animals of all species (including imaginary) are featured in a series of animation cels created for Sesame Street, Season 23, as conceived by Keith Haring (Lot 1091 in our Fine Art online auction).  In the late 1980s Keith Haring was invited to create animation characters and stories by his friend Arlene Sherman from Children’s Television Workshop. Although the artist passed away before the project could be completed, his initial ideas were finished by Bill Davis of Artbear Pigmation under the guidance of the Haring Estate and David Stark.  Each cel was hand inked and hand painted utilizing special animation pens and exacting color specifications. All art and final productions were approved and verified by the Haring Estate. The series was completed in 1992, and the animation spots are still broadcast today.

May 21st marks the Worcester Art Museum’s opening of Meow, a festival of all things feline, including the exhibition The Captivating Cat: Felines and the Artist’s Gaze exploring the feline as an iconic element of art. The exhibition features over 70 works from the museum’s permanent collection, organized around ten themes, which put the spotlight on cats as art from ancient Egypt to the modern day.

Come see what else is on offer at auction previews on May 12th from 12PM-8PM, and May 13th from 9AM-10AM. The Fine Paintings & Sculpture auction opens for bidding on May 13th at 4PM in our Boston Gallery.

P.S. Stay tuned for a pair of William Zorach puma bronzes coming up at Skinner in September!