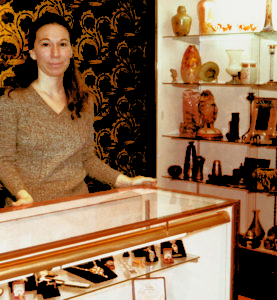 Skinner is proud to offer a diverse group of silver and decorative objects in our April 7 European Furniture & Decorative Arts auction from the collection of Carol Ferranti, a passionate collector, and our long-time friend and colleague. From her early days as an artist and colorist for fabric companies supplying designs for women’s wear, her keen eye and talents followed her throughout her life and touched everything she did. Carol began in the business with a booth at the Manhattan Antiques Center and later opened a shop at Madison and 72nd Street where she was a stop for those who appreciated eclecticism and great taste.

From over 20 lots of Tiffany “Vine” pattern flatware, that Carol collected individually for years, to an Indian spice box (Lot 66, Estimate $2,000-4,000), some of her strongest pieces in the auction are those in the Fine Silver section. Perhaps the most important piece is the Liberty “Cymric” bowl on a stand (Lot 24, Estimate $8,000-12,000), which I am told graced a table in Carol’s home for many years. 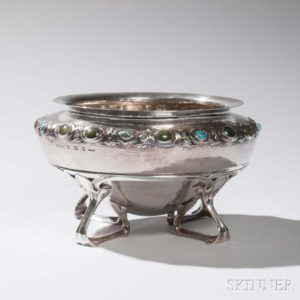 A forefather in the development of Arts & Crafts silver in England, Liberty & Co. began production of the Celtic-revival “Cymric” line of silver in 1899 under the influence of the famed designer Archibald Knox. In the spirit of Liberty & Co., the pieces were a compromise between the industrial mass-production and handmade design aesthetic popularized by John Ruskin and William Morris. Machine-made, but hand-finished and often accented by expensive looking hardstone or enamel medallions, pieces were both affordable and beautiful. They are now celebrated for their place in the design history of English Arts & Crafts movement. This bowl with its hard-stone accents and simple, but tasteful form showcases the strength of this production line as well as Carol’s eye for formidable design. 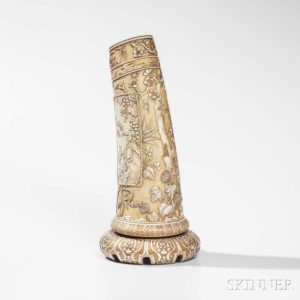 In addition to the silver in Carol’s collection, we have the pleasure of offering an eclectic group of decorative arts including English majolica, a Thomas Webb Tusk-form Vase (Lot 343, Estimate $3,000-5,000), and more. I hope you will come look at this bowl as well as numerous other offerings from Carol’s collection during one of our public previews on Wednesday, April 5th from 12-5pm and Thursday, April 6th from 12-8pm.