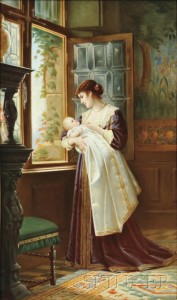 When Frederick the Great purchased the Royal Porcelain Factory in Berlin (Konigliche Porzellan Manufaktur) in 1763, he commenced his mission to vastly improve the quality of porcelain wares made.  Porcelain at that time was specialized enough as an industry that it became an item of luxury, often given as gifts to noble families. The goal of the factory was to have higher standards of quality than the Meissen factory, and so with Frederick the Great’s power came strides in efficiency, stable wages and subsidized health plans for its many workers, without the use of child labor.  During the 18th century, “KPM” became the manufacturer for dinner and coffee and tea services for many royal patrons and families. One of the most famous dinner services was given to the Duke of Wellington as a gift, and can be seen in Apsley House today in London.

In the late 19th century “KPM” plaques were often decorated with Biblical or mythological scenes, rendered with copies of well-known paintings by Old Masters, including da Vinci, Rubens and Murillo, and also with scenes depicting women in dishabille or repose. During this time, KPM blank plaques were sometimes sold to other manufacturers, still bearing KPM marks, but with paintings done by outside artists. One the KPM’s best known painters, Ludwig Sturm, went on to work for Meissen and eventually became Artistic Director of their Manufactory.  Artists’ signatures in general do not always contribute to a plaque with the highest value though. Typically, the stylistic execution of a plaque and the quality of the painting and subject matter often have more to do with determining the value of a KPM plaque than any signature. KPM plaques with many of the subjects noted above have been collectible on the market in recent years, much as they were prized in the later Victorian and turn-of-the-century period. 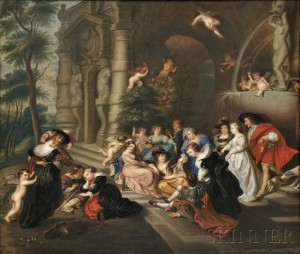 One of the plaques featured in Skinner’s January 2016 auction illustrates an artist’s variation on the painting by Peter Paul Rubens “The Garden of Love,” (Lot 583) where the scene depicted shows figures flirting in a garden. Couples encircled by putti are gathered in celebration, a fountain of Venus is nursing in the background, symbolizing marital happiness, and a peacock symbolizing the goddess Juno, perhaps as a sign of the protectorate of matrimony, is nearby.

Another plaque depicts a woman gazing by the window, with a child in her arms (Lot 572).  This scene of motherhood is rendered with crisp precision and vivid colors characteristic of KPM porcelain, perhaps implying a stylistic reference to pre-Raphaelite paintings, showing all of the typical fittings of a late 19th century Renaissance Revival parlor with a Persian rug, and trailing vines by a window of bubble glass.  The plaque bears signature “L. Sturm” in the lower left corner.

These are just two of the highlights for Skinner’s upcoming auction which includes KPM porcelain.  The plaques can be seen along with hundreds of other items at Skinner’s public preview in our 63 Park Plaza Gallery in Boston, Thursday, January 7 from 12–5PM and Friday, January 8 from 12–8PM.  Auction bidding begins at begins at 10AM Saturday, January 9, 2016 for sale 2875B.