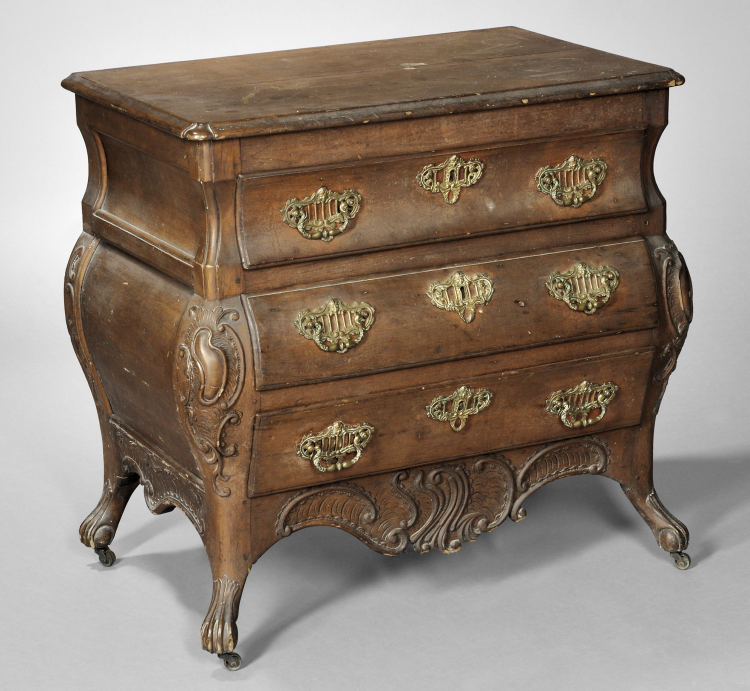 We found the carving on the bombe case to be quite ambitious. Carved rococo knees continue to carved claw-and-ball feet, joined by a deep shaped skirt, decorated with an elaborate spiraling pattern. The brass, rococo-style hardware seems to be original.

The drawers are very sturdily, constructed with large dovetails, the primary wood is butternut, and the backboard is a fielded panel, or a piece of wood that fits on four sides to a frame to help softwoods deal with shrinkage. In other words, this is a well made piece of furniture that has lasted for a very long time. The fact that the commode comes from French Canada makes it all the more rare and desirable.

At our August American Furniture & Decorative Arts auction, bidding was fast and furious among varied parties, including a number of Canadian bidders. All of this interest drove the price realized up to $77,025, including buyer’s premium. I was happy to learn that the consignor plans to spend this windfall on his child’s college education.

If you’re interested in learning more about Canadian furniture, I recommend the book “The Early Furniture of French Canada” by Jean Palardy. It’s a wonderful book with many excellent examples of this rare and interesting variety of antique furniture.