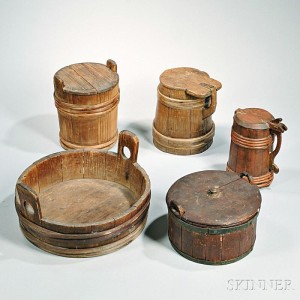 Whether painted or undecorated; staved or tinned, with or without lids; utilitarian buckets, pails, and firkins have for over a century, been popular with collectors. Like so many things with the passage of time, the terminology that is used to describe these humble objects has become muddled.  I have always been a firm believer that when describing historical objects, we should describe them today as they were described during their original period of use. Let’s take a look at the historical meaning of these words.

The Oxford English Dictionary describes the primary meaning of bucket as “The vessel in which water is drawn out of a well.”  This suggests that a bucket has a singular use of retrieving water from a well.  Nathan Bailey supports this definition in his 1675 Universal Entymological English Dictionary as “a Pail made of Leather or Wood to draw Water in.”  Interestingly, Bailey’s definition further describes a bucket as a leather or wood container.  Numerous dictionaries published during the 18th and 19th centuries also similarly define bucket, but substitute the word “pail” with “vessel.” 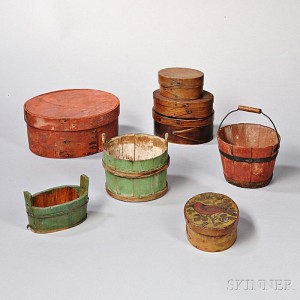 Pails were used to carry liquids from one place to another. Five Oval Pantry Boxes and Three Small Wooden Pails (Lot 1088, Estimate $300-$500)

The primary meaning of the word pail as defined by the OED is “An open-topped vessel with a hooped carrying handle, typically of slightly tapering cylindrical shape, used esp. for holding or carrying liquids; (now more generally) a bucket.”  Various dictionaries from the 17th through the 19th century also support the notion of a pail as a vessel for carrying liquids often specifically mentioning water and milk as the liquids specifically carried by pails.

A Firkin, unlike a bucket or a pail, has its roots as a specific quantifiable English measure. A firkin, generally, is a liquid measure consisting of a quarter of a barrel or eight gallons. From the 16th century commodities such as ale and beer were commonly marketed using this measure. A firkin of ale measured eight gallons while a firkin of beer measured nine gallons. In the case of ale and beer, the firkin container was simply a smaller version of the common barrel. Other materials were also quantified by firkins. Butter, fish, and soap were also commonly sold by the firkin. A firkin of butter, for example, was by law required to weigh fifty-six pounds and numerous laws are recorded in England and America regarding the production and marking of firkins to identify who made them and the container’s capacity. Very few containers broadly referred to today as firkins have any such marks. 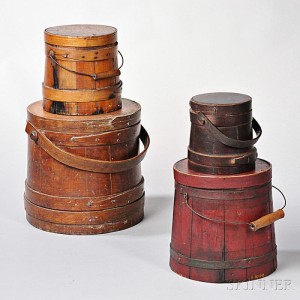 Objects commonly referred to today as firkins are actually lidded pails or buckets. Historically, a firkin is a specific unit of measure. Four Firkins (Lot 1172, Estimate $200-$300)

So if a firkin is a specific measure of a product, what really are all of those lidded staved containers with bent wood handles that survive in a variety of sizes and colors that we commonly refer to as firkins?  Depending upon the intended function the most appropriate terms are either, lidded bucket, if it was intended to draw water; or lidded pail, if it was intended to transport a liquid from one place to another.  But, over the years, the colloquial definition of firkin has evolved.  An article on maintaining an efficient kitchen titled “Anna Maria’s Housekeeping” published in the 1883 publication Wide Awake urges each kitchen to have “a firkin, or large pail with tight wooden cover for garbage… If the [food] scraps must be saved, have a waste pail with a tight cover, or a covered firkin large enough to empty a panful of parings into in a hurry without dropping any on the floor.”  These containers designed for kitchen waste were, it seems, very common as the article further notes that “Kitchen furnishing shops supply large tight garbage firkins neatly painted with covers, which never need be obnoxious to sight or smell.”

Further evidence for the evolved definition of firkin is found in the August 20, 1883 Pall Mall Gazette where it is noted that farm laborer’s in England carry their “day’s [meal] allowance to the field in a sort of miniature cask, known to him as a ‘firkin’ which may hold from a quart to a gallon.”

However you describe them, buckets, pails, and firkins are important survivors of everyday life.  Like so many things that began life with a single purpose, the functions of these items have become blurred with the passage of time.

7 thoughts on “Buckets, Pails, and Firkins; What’s the Difference?”