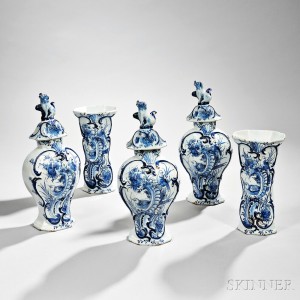 In the 17th and 18th century the manufacturing of tin glazed earthenware in Holland and the British Isles (including Scotland and Ireland) referred to as delft or delftware, was all the rage.

Chinese porcelains strongly influenced much of their designs, first in blue and white and then in the beautiful soft polychrome enamels. Certainly the influx of these porcelains to Holland via the Dutch East India Company helped inspire the beautiful designs and motifs, particularly on the large elegant chargers. In addition to chinoiserie designs, decorative elements included garden and figural landscapes, birds, coastal views, commemorative and historical subjects, religious themes and florals. 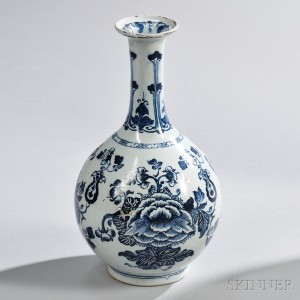 By the mid-18th century the production of this tin glazed pottery slowed and very little was manufactured into the 19th century. The Dutch factory known as “The Three Bells,” under the firm of van Putten & Co., was the final producer lasting until about 1850. In the mid 1880’s the firm of Joost Thoost & Labouchere re-established the production of delft-like wares although their wares are lead glazed and bear little resemblance to their earlier namesakes.

The collecting of these tin glaze earthenwares in recent years has softened due to differing tastes. As with many collecting categories these days, the very advanced objects still command  much competition in the marketplace as  advanced collectors continue to fill gaps in their expansive collections the remainder realizing far less than they did ten or twenty years ago.  Many of these objects are beautifully decorative and have become quite affordable. There are certainly many opportunities for one to assemble an extensive collection today.

Amongst the offerings in Skinner’s European Furniture & Decorative Arts auction on July 18th and 19th, a collection of over fifty lots of fine tin glazed earthenware in both blue and white and polychrome enamel decoration will be featured.