BOSTON, MA – Skinner, Inc. presents an auction of Clocks, Watches & Scientific Instruments featuring antique tools and diverse scientific apparatus as well as timepieces of all types in its Marlborough Gallery on April 20 at 10AM.

The top lot is the imposing 96-inch Tiffany & Co. No. 2 Astronomical Master Regulator (Lot 189, estimate: $100,000-150,000). This complex masterpiece of horology has multiple world time and tidal dials, alarm dials, and twenty-four hour slave dials, all above the subsidiary calendar dial showing the month, zodiac signs, the day of the week and month, and leap years.

Another outstanding timekeeper is the Lemuel Curtis Mahogany and Parcel-gilt Girandole Clock (Lot 154, estimate: $7,000-9,000).  Director Pro Tem,  Jonathan Dowling notes that examples rarely show up on the market. This one is especially notable for the original reverse painted throat tablet in a fine mustard and grey paint with a spread eagle over the double shield image and signature.

A wide range of tools from Roman times to the 19th century are from the extensive collection of  Laurent Adamowicz, entrepreneur and public health activist as well as a passionate collector and scholar of tradesmen’s tools and their markings. Lots include examples from a broad array of trades including carpentry and furniture making, musical instrument making, building construction and much more. 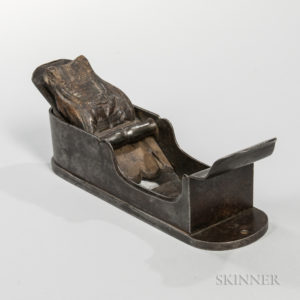 Of special interest among the watches are more models, prototypes, and movements from the collection of John Gelson, the last president of Hamilton Watch Company.  Also noteworthy is a wide selection of 19th and 20th century pocket watches with complications such as split-second chronographs, minute and five-minute repeaters. Makers represented include Patek Philippe, IWC (International Watch Co.) Zenith, and Vacheron Constantin.

Small-scale scientific instruments and models from, the Leon Stabinsky collection offer the appeal of the unusual, the miniature, and the ingenious.  In addition to anemometers, pocket globes, theodolites, and barometers, there are more esoteric items such as baroscopes and chondrometers.

Additionally, there are such important and unusual scientific items such as 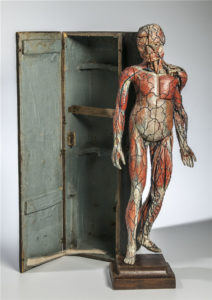 This diverse sale ranges across centuries, around the globe, and over many scientific and mechanical disciplines. As well as esoteric tools and fine clocks, offerings include affordable and eminently wearable modern wristwatches and a choice selection of early to contemporary fountain pens.

Previews will be held in Marlborough on April 18, 12PM–5PM, April 19, 12PM–7PM, and April 20, 8AM-9:30AM.  Free and open to the public, specialists will be on hand to answer questions.  Auction catalogs may be purchased on the Skinner website.

Laurent Adamowicz, Author of Codes & Symbols of European Tools will present an illustrated talk on his research on antique tools and the codes and symbols associated with them over the centuries.  Adamowicz will discuss how they relate to Europe’s history of conflicts, wars, secret societies, and religious and political allegiances. Join us for a reception at 5PM and talk at 6PM on Wednesday, April 18th at the Marlborough Gallery.