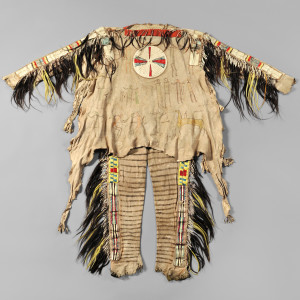 And the gift-giver was not a transplanted Plains Indian chief. He was the son of the lord of the manor, a British nobleman who had collected the garb during his military service in Canada during the 1860s.

Fast forward to Massachusetts, 2016. These rare examples of American Indian clothing were among the top lots in Skinner’s May 6 auction of American Indian & Ethnographic Art. The sale set a record for this category for Skinner: over $1.9 million realized on a total of 289 lots. 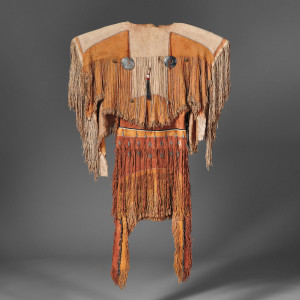 What explains the exceptional results at this sale? The three top lots of this record-breaking auction totaled well over $1 million. All were articles of clothing, with specialized requirements for proper storage and responsible display. Why did these complex, curatorially challenging items sell so well?

• Lot 143, the Blackfeet chief’s shirt and leggings, was acquired by a major western museum. The winning institution plans a major opening event when the items go on display. The suit is rare on a number of counts. Richly trimmed with hair and embroidery it is very early, dating from the 1830s. Most significantly, it displays thirty-five painted depictions of the war exploits of the suit’s owners. The symbolism of these colorful pictographs, as well as the well-documented history of its English ownership, is explored at length in an essay that can be found here. (Lot 143, sold for $663,000.)

• Lot 148, an Apache two-piece deerskin dress circa 1850, is unique or nearly so. It is a very old example of the form, and both pieces of the garment have remained together, which is highly unusual. The quality of workmanship, tanning and tailoring are exceptional, and the trim and decoration have remarkable and well-preserved detail. The outfit had been in the same private collection for many years, and was sought by multiple bidders because of its great rarity. (Lot 148, sold for $543,000.)

• Lot 212, a Northwest Coast dance apron or blanket waist robe from the later 19th century, had great graphic appeal. Diehl pointed out that the rare piece had highly desirable patina, a term most often associated with furniture or metal ware. A ritual item such as this shaman’s dance apron is enhanced by evidence that it has been respectfully used for its intended purpose. There is a great deal of interest in Northwest Coast material, but very little has been appearing on the market. That was another factor that boosted this item far above its $12,000-16,000 estimate. (Lot 212, sold for $73,000.) 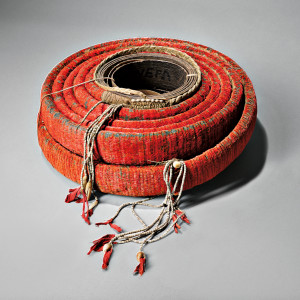 Deihl pointed to other lots that attracted lively bidding and added to the success of this sale. “Beautiful, bizarre, and unusual” were his words for Lot 29, a coil of Solomon Islands currency. Composed of thin wooden coils wrapped with feathers of the scarlet honey-eater, it was an outstanding example of the exotic attraction of much Pacific Island material. This artifact like a number of others in this sale greatly exceeded its estimate. (Lot 29, sold for $17,200.)

Other high achievers, exceeding their pre-auction estimates, were examples of beadwork. This category is much beloved by collectors and was well-represented in this sale. Two examples that attracted multiple bidders were a Blackfeet beaded buffalo knife sheath from the 1870s (Lot 169, sold for $25,830) and a Kiowa beaded toy cradle of about the same period (Lot 126, sold for $11,070).

All prices realized in the May 6 American Indian and ethnographic art sale are available online at www.skinnerinc.com.

Widely regarded as one of the most trusted names in the business, Skinner appraisers have appeared on the PBS-TV series, Antiques Roadshow, since the show’s inception. Skinner has galleries in Boston and Marlborough, Massachusetts, as well as in New York City and Miami, Florida, with bidders participating in person, by phone, and online. Join auctions live with SkinnerLive! and Bidsquare.