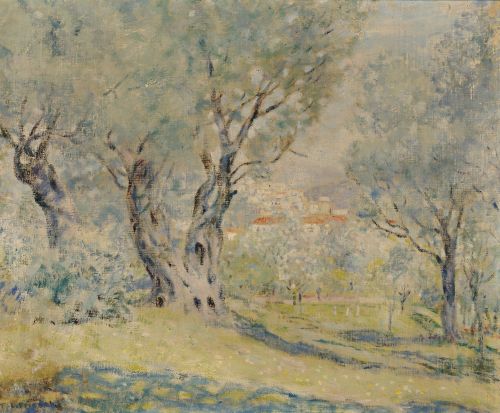 What happens between the time you bring in your 19th Century Serapi Rug or Gorham Silver Dinner Service to Skinner for possible consignment, and when you receive payment for its sale?

Every object has a different story. In fact, we have over 550 different stories coming up in the American & European Paintings & Prints auction on January 28th. Let’s follow the process to authenticate a particular painting: Lot 441, a Frieseke landscape.

The gentleman who brought in this landscape set up an appointment to show me a yard sale find. If you read Chris Barber’s posts on consignor personalities, you already know that such an appointment can go in wildly different directions. In this case, it led to the right place. Before me on the table was a softly lit Impressionist landscape depicting an olive grove with distant red-roofed houses. It was a French scene; southern France. The brushstrokes were loose and feathery, and well executed by a sure but delicate hand. This was a work of quality.

The painting also had some condition issues—minor paint loss and a small deformation to the canvas—indicating that the landscape had been around for some time, but had been neglected. Faint black lines down in the lower left corner told me why the gentleman was so excited by the painting: it was signed, although the writing was difficult to decipher.

The signature seemed to read “F.C. Frieseke,” and stylistically the painting was in the right ball park for this painter. Frederick Carl Frieseke was an American Impressionist who worked in France. He summered in Giverny, where Claude Monet lived.

It was time for some quick, spur of the moment research. I needed to find out whether the subject and signature were consistent with Frieseke’s hand? How about the brush work? The scene wasn’t Giverny, so did Frieseke ever work in the south of France? Quick comparisons with other well-documented works gave me three “yes” answers. The yard sale find looked right.

Fifteen minutes later, I was back in the lobby. At this point it was time to discuss consignment options with the gentleman—I was hoping to keep that painting at Skinner. We talked about the appeal of the painting, its condition, and what it might sell for if it was right.

If it was right? But didn’t I just say that I thought it was, and that we wanted to represent it? Yes, but I, like most of my Skinner colleagues, am a generalist. That means that I can look at, for example, your Frieseke painting, Rembrandt etching, or Rodin bronze, and give you an opinion. But that’s not enough to authenticate a work of this caliber.  For that, I needed to tap a top expert.

For Frieseke, that expert is Nicholas Kilmer. He has spent years researching the works of Frieseke, and is compiling a catalogue raisonné in conjunction with the Hollis Taggart Galleries.

After examining images we sent him, Mr. Kilmer gave us some good news. The landscape looked so familiar that he initially believed it was a known work that should have had a loose oil sketch on the back. But our painting didn’t. It was similar, but not the same.  To be certain, the painting went on a little road trip (that is to say it was hand-carried) to Mr. Kilmer, so he could view it in person to confirm its authenticity.

Not only did Mr. Kilmer authenticate the find, he confirmed this to be a new, previously undiscovered painting executed by Frieseke while he was in Cagnes. The yard sale find turned out to be a treasure beyond even my greatest of expectations.

The story isn’t over yet. The next chapter of this adventure begins as we market the painting for auction. To see how it does, come to the auction in Boston on January 28, 2011 or watch it live on our web site.

8 thoughts on “Consignment and Beyond: The Quest to Authenticate a Frieseke Painting”