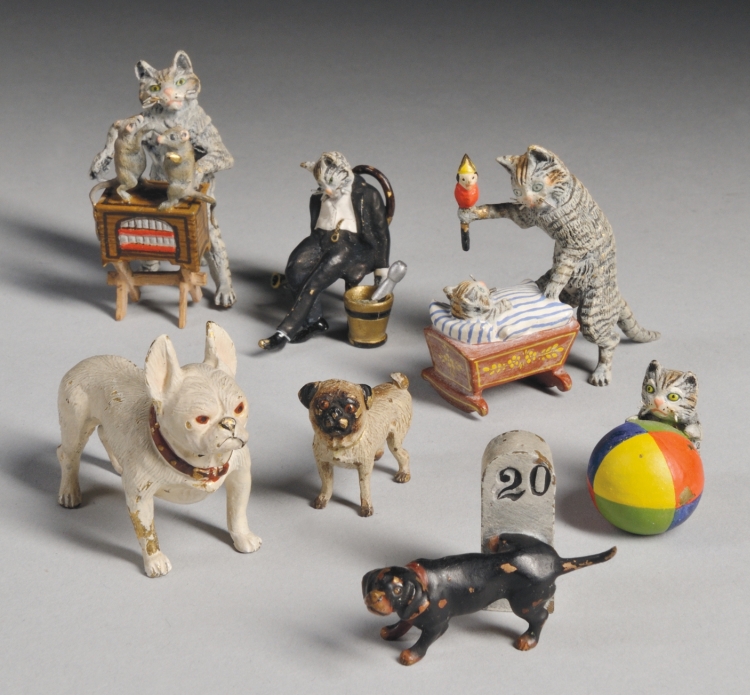 These whimsical cat and dog cold-painted bronze figures will be sold on December 13, 2012 at the Skinner Holiday Auction

A rare single-owner collection of over 115 of these late 19th and early 20th century Austrian cold-painted bronze miniature figures will be offered at the Skinner Holiday Auction in December. These figures have remained in the collection of a middle-class German banking family since they were purchased. The grandmother of the consignors chose the wide-ranging figures in this collection during vacations and visits to Austria and the Black Forest up until about 1930. 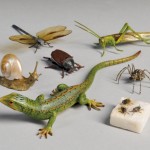 With the rise of the Nazi Party in Germany in the 30s, the family emigrated first to Italy and soon went on to America, settling in the Boston area. Meanwhile, the collection of figures was left behind in Germany for safekeeping with a loyal family friend through the war. The figures were later reunited with members of the family that had collected them.

This collection encompasses a wide range of subjects that were available at the time.  The condition of the pieces is exceptional, with original paint and details. Life-sized figures include a spider, grasshopper, lizard, dragonfly, a snail with a shell, and one of the more amusing pieces: flies on a cube of sugar. 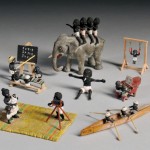 Miniatures dominate the collection. Highlights include Black Americana, school lessons, athletes rowing, a photographer taking a portrait of a mother and children, a couple kissing, a child smoking, a duo playing a piano, and people riding or climbing animals including an elephant, stork, camel, and zebra. There are also Austrian peasant folk and huntsmen with horses and hounds, depictions of clowns, a Struwwelpeter figure, and charming groups of children at play.

The collection contains numerous animals. Some are realistic, such as pugs, dachshunds, chicks, mice, and rabbits, but others are dressed up or engaged in human-like activity. Cats can be found wearing a tuxedo, drunk 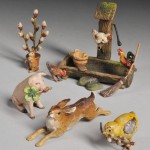 and playing a street organ for dancing mice, holding a rattle for a kitten in a cradle, washing another cat, and selling plants as a street vendor. Monkeys are seen sledding or wearing a hat and smoking a pipe. A frog washes another frog in a tub, scolds a smaller frog on a toad stool, plays a street organ, or tries to kill a fly on an anvil with a hammer.

Bergman, the most well known maker of the day, is represented by a miniature group of chickens at a water pump, a “gold” pig, and a squirrel with nut figure.

It is uncommon in this day and age that a collection of Austrian cold-painted bronze miniatures as wide-ranging in subject matter and in such wonderful condition comes on the auction market.  Join us for the sale on December 13, 2012, session II of the Discovery Holiday Auction.

2 thoughts on “Austrian Bronzes: A Collection of Figurines both Whimsical and Life-Like”