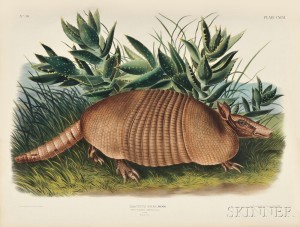 An independent Audubon Society has decided to de-accession one of the great masterpieces of 19th century natural history book illustration. The Society has a mission: to conserve and restore natural ecosystems, focusing on birds, other wildlife, and their habitats for the benefit of humanity and the earth’s biological diversity. Maintaining rare and valuable books is not necessarily a part of that mission. As a result, the book collecting world has an opportunity to admire and perhaps acquire the complete first edition of Audubon’s Viviparous Quadrupeds of North America.

This set of three imperial folio volumes is illustrated with 150 full-color plates of many familiar four-footed denizens of the continent, and is accompanied by three octavo-format text volumes. The large and striking images, executed in full vivid colors, spill with vitality from the pages. Audubon was a genius of composition, selecting meaningful surroundings for each animal, placing it in context. These animals are depicted in varied naturalistic settings that give information about the lifestyles and habits of each. Because the images have been favored by collectors for more than 150 years, many of the plates have been framed and individually displayed since they were new, often exposing them to the vagaries of the elements, with the resultant suffering of color and hue that occurs with ultraviolet degradation. An intact copy of the set, continuously bound and kept closed is like a vault for those elusive colors. 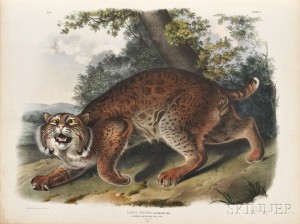 The subjects are extensive: fierce mother skunk protecting her kits sheltering in a hollow log; a family of house mice stealing cheese from a plate in the shadow of a ginger jar; flying squirrels; a raccoon with the accustomed steady confident stare perfectly wrought; musk ox; moose; a snarling wolf picking a bone from a campfire; rabbits; bears; armadillo; all are to be found, in natural habitats, and often shown in obvious conflict with the burgeoning human encroachments on those habitats. One has the singular pleasure of admiring both the majesty of the animals themselves and the skill of the artist who has so ably represented them. 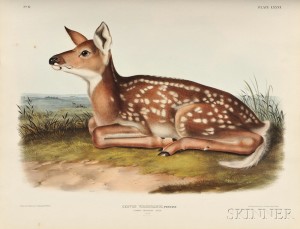 Audubon’s 1843 trip up the Missouri River into the Dakotas was a bit of a swan song for the storied illustrator and naturalist. His sons were taking over much of the hunting, sketching, and specimen collecting. The elder statesman was an active participant in the expedition, even though he was no longer hitting the stride he enjoyed during his youthful pursuit of birds. And although the number of specimens was smaller than those depicted in the Birds of America (illustrated with 435 plates of 500 birds), the arresting images of these four legged-mammals is engaging on different levels. Implicit associations crop up all over the emotional map. The fawn is sweet and charming, as are the rabbits and squirrels. The wolves, bears and wildcats are threatening and beautiful. We feel sympathy for the fox caught in the leg hold trap. The buffalo look doleful. Sleek furry coats are assembled in rainbows of brown, black, grey, chestnut, and white.

These images help to foster a love and sense of responsibility for the natural world, while educating and creating a sense of wonder. Highlighting Audubon’s work will always bring the message back to conservation and is a fitting legacy fulfilling the mission of the Society that bears his name.

Skinner is pleased to offer this set at our fall Books & Manuscripts auction on November 15th, with an estimate of $200,000 to $300,000, and proceeds to benefit an independent Audubon Society.