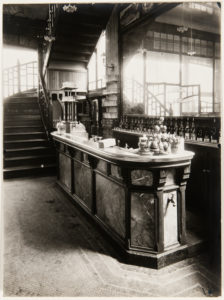 Skinner’s September 21 Fine Photographs auction opens with two special groups (both vintage and later prints) of images by Eugène Atget and Berenice Abbott. Atget (1857-1927) is remembered for documenting historical aspects of the city of Paris as it was being transformed by modernization. His work inspired Abbott (1898-1991) to focus on the changing buildings and neighborhoods of the city in her project Changing New York. Atget and Abbott met in 1926, and developed a special bond. When he died the following year, she acquired his archive and for the rest of her life worked tirelessly to preserve his photographic legacy.

Eugène Atget’s 30 year-career bridged the 19th and 20th centuries. In the 1890s, he photographed what he described as “Documents pour artistes”—streets, gardens, monuments, and architectural details like doorways and ironwork, etc. Beginning around 1900, as the urban landscape was being transformed by Baron Georges-Eugène Haussmann’s modernization campaign, he became a purveyor of “photographic views of Old Paris,” such as Bar de Cabaret (lot 110) and a street view with a newspaper kiosk (lot 114), both on offer. While his images record physical details of the city, they symbolize a Paris that was slowly fading into memory. At the same time, their combination of aestheticism and veracity is what so inspired Abbott and other photographers such as Walker Evans to whom she showed his work.

For nearly a decade, the American-born photographer Berenice Abbott lived in Paris, working as an assistant to Man Ray in his portrait studio and eventually operating her own portrait business. It was Man Ray who first introduced her to Atget’s work. Intrigued, she visited him several times, buying prints and taking his portrait. When she returned to show him the results, she learned that he had died. 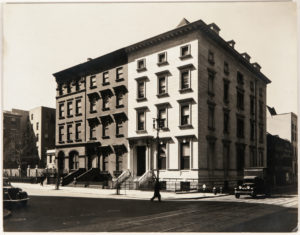 Upon returning to New York in 1929, Abbott continued to practice photography. Inspired by Atget’s project, she systematically documented the city, culminating in Changing New York. With funds from the Federal Art Project, she was able to devote herself to the project from 1935 to 1939, producing hundreds of photographs of the city, including iconic views of Fifth Avenue buildings and a ferry building in lower Manhattan featured in the auction (lots 115 and 116). In her proposal to the federal agency, Abbott noted the urgent need to document places that had survived “the onward march of the steam shovel,” adding that “it is important that they should be photographed today, not tomorrow; for tomorrow may see many of these exciting and important mementos of 18th and 19th Century New York swept away to make room for new colossi.” [1]

Abbott brought Atget’s archive, which included more than 1,500 glass plate negatives and 8,000 prints, back with her to New York. During the 1930s through 1950s, Abbott was instrumental in ensuring Atget’s legacy by promoting his work to museums and galleries through publications and exhibitions in addition to printing hundreds of images from his negatives. In 1968 New York’s Museum of Modern Art purchased Atget’s archive from Abbott, making its holdings the largest and most significant collection of his work.

The relationship between the two photographers and their work will be explored in the upcoming exhibition Old Paris and Changing New York: Photographs by Eugène Atget and Berenice Abbott, on view at Cincinnati’s Taft Museum of Art from October 4, 2018, through January 20, 2019.