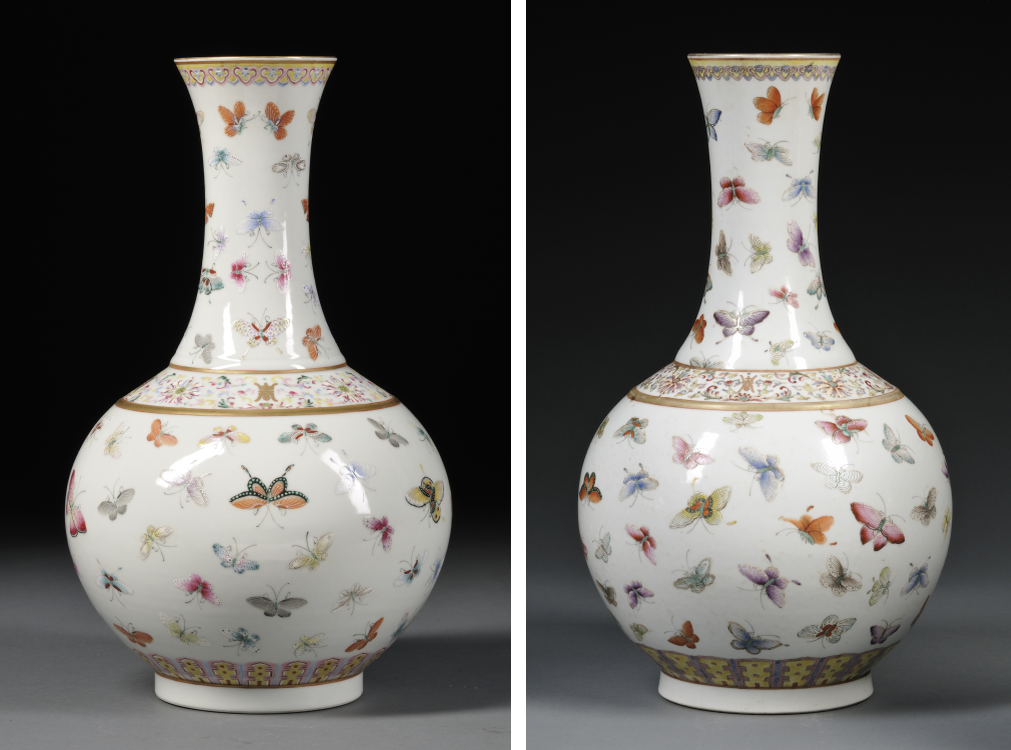 These two nearly identical "Hundred Butterflies" Chinese vases from the 19th century will be offered in the Skinner Asian Works of Art auction, April 20-21, 2012 in Boston. (Lots 641 and 644)

Chinese buyers ruled Asia Week New York once again in 2012. I try to attend Asia Week in New York each year, and this year I spent five days in the city, visiting museums, attending auctions, and talking to dealers, specialists, and other lovers of Asian Works of Art. We all marveled at the seemingly unstoppable frenzy of the Chinese art market, and wondered what this means for those who buy and sell Asian art in the West. For many, it has become a challenge to compete.

There seems to be no end in sight to the trend of Chinese buying their art back, much of it from old Western collections, and Chinese buyers filled the auction rooms in New York, driving prices up to staggering heights.

For the most part, Imperial pieces brought the highest prices this week. Auction houses and top dealers are still discovering and offering a diverse and select group of works. A hand scroll estimated between $700,000 and $1,000,000, “Emperors of the Southern Song 12th-13th Century,” sold for $5.6 million. The same hand scroll sold in an April 2001 sale, along with two other works, for just $119,112, suggesting that there is more competition for Imperial works with each passing year.

As the number of wealthy Chinese collectors entering the market continues to rise, competition for all varieties of Chinese art will become fierce.

Skinner’s Asian Works of Art auction on April 20th and 21st offers buyers the opportunity to compete on a range of fine Asian and Chinese works similar to those seen at Asia Week auctions and galleries, including these two “Hundred Butterfly” enamel vases each with an iron-red Guangxu mark. Other works offered in the April auction include jades, bronze censers, textiles and several fine Ming dynasty Buddhist bronze figures.

Browse our Asian Art auction catalogue and let us know in the comments what you think will turn out to be the top lot. One thing is for certain—we expect crowds of Chinese buyers to turn out for the Skinner auction.