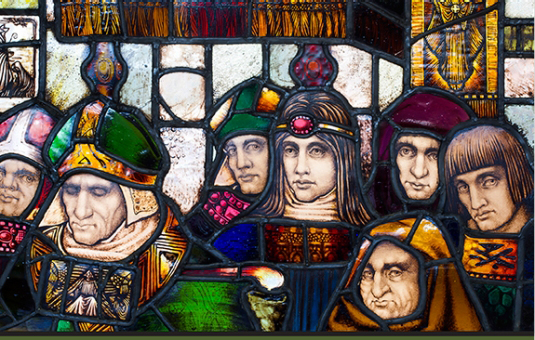 The Irish Arts & Crafts movement often does not get the attention it deserves in publications and exhibitions. That is why it was particularly exciting to visit the Making It Irish exhibition at the McMullen Museum of Art at Boston College over the weekend. The curators have brought together over 150 objects, including textiles, metalwork, glass, furniture, books, and jewelry, to examine the movement in the context of the enormous social and political upheavals that characterized Ireland in the late 19th and early 20th centuries. It was fascinating to see how the artists used the language of Celtic imagery in order to forge a unique Irish identity apart from English culture. 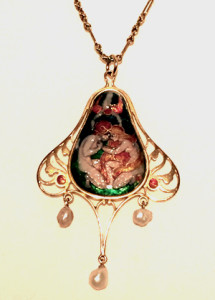 I was especially struck by the beautiful enamels by Phoebe Anna Traquair, who was born in Dublin in 1852. She attended the School of Design at the Royal Dublin Society. After her marriage in 1874, Traquair and her husband moved to Scotland, where she would live until her death in 1936. Traquair worked across mediums. She was an accomplished painter, embroiderer, bookbinder, and enamellist. Her individual iconography often included scenes depicting love; romantic, familial, or religious. The five enamel pieces on display in the exhibition were beautiful examples, not only in composition, but also in the expert use of baisse taille enamel. This technique uses layers of translucent enamel over patterned metal. The play of light between the enamel and the metal backing gives the pieces a painterly effect. My favorite piece was a pendant entitled The Lovers which depicts a man and woman being encouraged to kiss by an angel. It was surprising to read that the piece was made in 1902 and Traquair had only learned to enamel in 1901.

The stained glass by Richard King, Harry Clarke, and Willhelmina Geddes were also highlights of the exhibition for me. The iconography is mixed with Celtic inspiration, Christian imagery, and the new modernist sensibility that influenced all the arts in Ireland, including the contemporary Irish Literary Revival. The Geddes panel The Fate of the Children of Lir is a wonderful example of this uniquely Irish Arts & Crafts iconography. It depicts a medieval Irish story of children turned to swans by a wicked stepmother and finally saved by the intervention of the Catholic Church, rendered in a distinctly modernist style. The stained glass installations in the exhibition are very well done, which allows the visitor to appreciate the small, fine details that make up the compositions.

Making It Irish is only on view until June 6th at the McMullen Museum at Boston College. For more information please see their website.