One of the most compelling aspects of antique Oriental Rugs is the sheer range of artistic expression they are capable of:  from the crudest Turkish Tulus — little more than a patterned sheepskin made of knotted wool — to the most refined Persian workshop weaving.  The full range of rug art is represented in the our Fine Oriental Rug & Carpets Auction on Saturday, September 26th in Boston.

At one end of the aesthetic continuum are tribal weavings, of which this Turkoman tent-band (Lot 85) is a rare and beautiful example. Even though this particular piece is the work of a mid-19th century pastoral nomad, its design vocabulary is much older, stretching back thousands of years — its archaic plant-forms and totemic figures are a 19th century remnant of “the art of the Steppes”. Part of its power is that all the forms are in pile, on an undecorated flat-woven ground — they exist in 3-dimensional space, they come at you. Imagine it in use, 150 years ago: except for the fire-pit in the center, the inside of the yurt is dark and smoky, but the people inside are ringed about by these haunting, spooky, iconic figures on an ivory ground, rising out of the surrounding gloom. 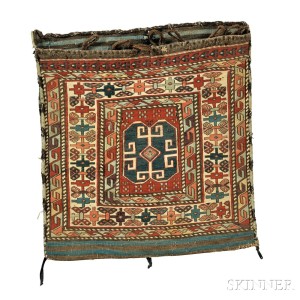 This pair of early Soumak bags (Lot 104) embody the idea of “social merit” that comes from superior weaving. The life of pastoral nomads, both men and woman, often required unrelenting labor, daily exposure to the elements, and the necessity of constant movement. Their way of life demanded that their houses, their furniture and their storage containers be eminently portable. Consequently, the Bag — for transporting bedding, personal items, grain, etc. — was central to nomad culture.  The most inspired and gifted weavers would lavish all their attention on the choice of wool, the quality and clarity of dyes, the execution of design.  This was the main area in a nomadic woman’s life where she could shine.  And a striking set of bags, such as these, in a culture that holds weaving in great regard, would not only have conferred honor on the weaver, but on her family as well, and especially on her husband, for whom she had made them. 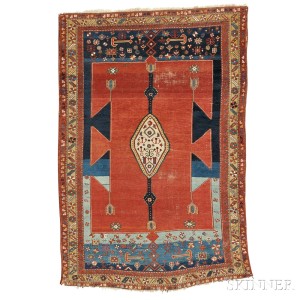 This late 19th century Bakshaish rug (Lot 107), made in Northwest Persia, occupies a middle ground between tribal weaving — that is, done from memory, and made mainly for home use — and urban workshop weaving — woven from a design the weaver has been given, and made for the marketplace.  As a village “cottage industry” rug, it would have been made on a vertical loom (as in workshop weaving) in a woman’s home, made for eventual sale (again, like workshop rugs), but the woman who made this rug was free, to stop or start her work on it as the demands of her domestic life allowed, and relatively free (within the constraints of rectangular space) to weave what she wanted.  This combination of memory and invention, of the playful, yet inspired, use of space, occasionally results in rugs like this — antique Modern Art for the floor. 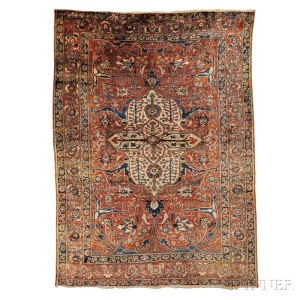 At the other end of the artistic continuum from tribal weaving is this elegant silk Heriz rug (Lot 125), an urban workshop rug, made in late 19th century Northwest Persia.  This is not art for the floor, this is art for the wall:  it was made to be seen from eye level, to be contemplated.  This is art that is both refined and show-offy, both restrained and exuberant.  And it is made of the best materials available — the finest silk, the best vegetable dyes, a supple, sensuous handle, and the most expressive drawing imaginable.  The arabesques and tendrils, the palmettes and blossoms weave in and out, above and below each other, creating three-dimensional depth on a two-dimensional surface.  Above all, this is a collaborative art  — the designer, the silk-spinner, the dyer, and the weaver, fusing their skills to make something intended solely to delight.

Come see the full spectrum of the rugs on auction this weekend at our Gallery Talk on September 25th from 5PM to 7PM, where I will walk you through the gallery and explore the art of the carpet.