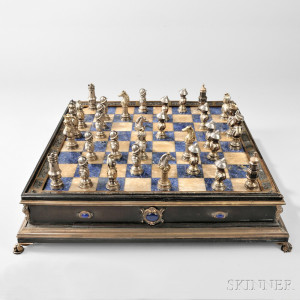 Chess sets depicting actual historical figures and their campaigns have dominated the chess world for centuries, but  we have not found anything like the French .800 Silver and Parcel-gilt Chess Set (Lot 60, $8000-12,000), with the mark of the famed Art Nouveau jeweler Guillemin Frères on each piece.   In this set, an entire court of players squares off against the other, one with a clear Western aesthetic, the other parcel-gilded and bronzed are in a more “Eastern” attire. The allure of the exotic and mysterious “Orient” was quite a popular theme in European art and culture throughout the 19th century and into the early 20th century.

And while the general archetype of Christian versus Moors in chess had been common theme for centuries, the level of detail on the set makes one wonder if it could be representing an actual historic campaign. Sets depicting the opponents of the Crimean War (1853-56) were popular during this time, though the dress of the players in this set looks much earlier. Could it be the Ottoman Sultan Süleyman “the Magnificent” and his iconic wife Hürrem Sultan versus the Hapsburg Emperor Charles V?

The highlight of our Fine Silver component of our European auction (Auction # 2850B) , on Friday, October 9th in Boston, this set is a real showpiece of turn of the century craftsmanship that will surely attract both chess and silver enthusiasts alike.