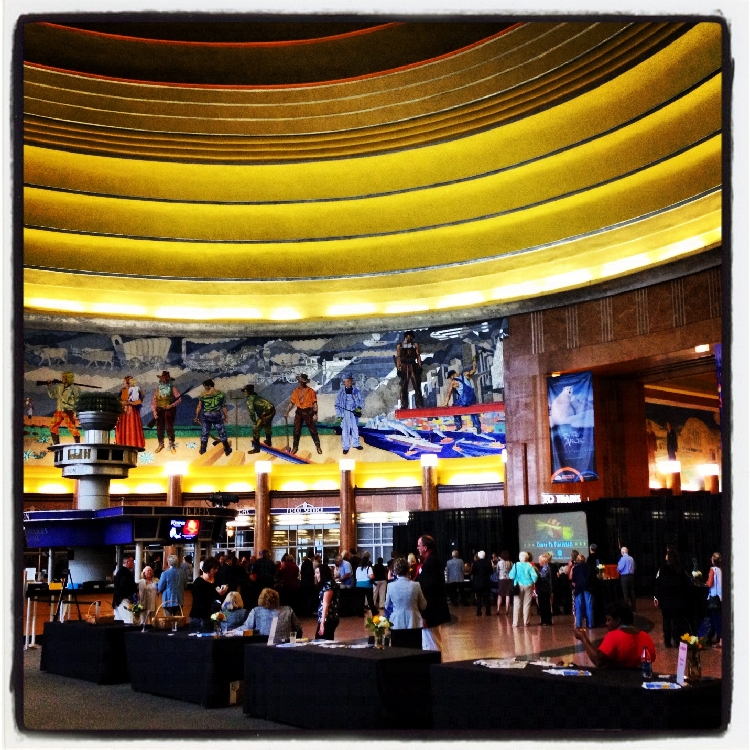 Cincinnati, Ohio was the fourth stop in the Summer 2012 tour of Antiques Roadshow.  This summer is season 17 for me, and while I’ve lost count of the cities I’ve traveled to over the years — I’m guessing nearly 60 — I always appreciate the opportunity to discover something about the art, architecture and design of the locale.

On Thursday night I represented Antiques Roadshow at a station event at the Cincinnati Museum Center.  Formerly the railroad’s Union Terminal (built 1929-1933), the stunning Art Deco building is a National Historic Landmark.  The central rotunda showcases a series of fabulous mosaics by Winold Reiss (1886-1953), commissioned in 1932 to depict the history of Cincinnati and its industries.  Scenes of working Americans, the history of passenger transportation, and westward expansion all help to tell the story of how Cincinnati was transformed from a frontier town to a gateway city. I also peeked through the windows at the Rookwood Ice Cream Parlor, originally laid out in 1931-33 as a tea room. Famous for their art pottery, Rookwood created their last-known tile installation here.

Friday was a busy day. I spent the morning at one of the oldest art museums in the country, the Cincinnati Art Museum. I was most drawn to the Cincinnati wing, built in 2003 to house an exhibit of art made for or by Cincinnati artists. It was a wonderful immersion into the art and design of Cincinnati. 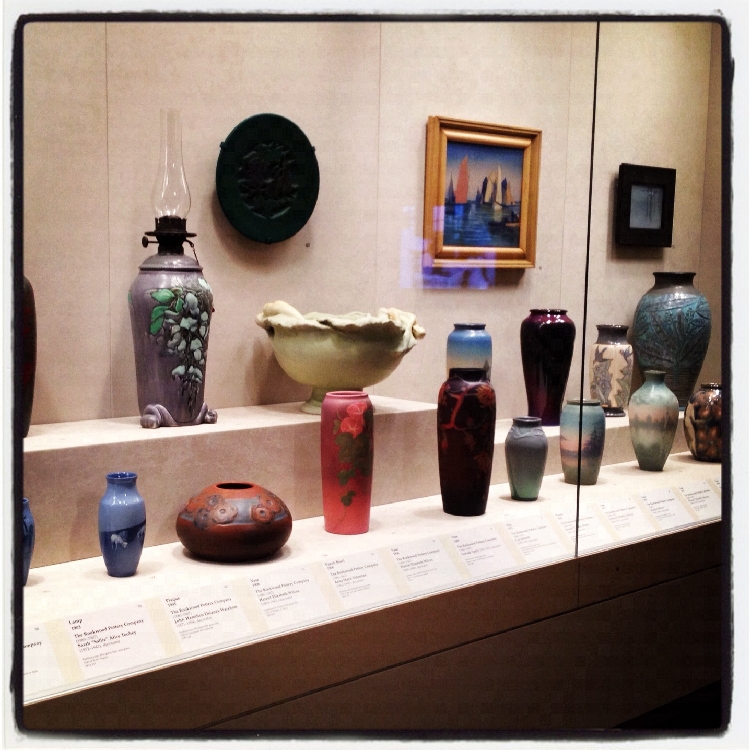 By 1819 Cincinnati had earned the title “Queen of the West” for being one of the most sophisticated cities of the frontier. Later in the 19th and early 20th centuries, fueled by innovation and industry, the city produced Cincinnati art carved furniture under the direction of wood carvers Henry and William Fry and Benn Pitman. Women artists were integral in the production of much of the heavily carved floral, leaf and scroll-work designs and also for the quantity of china painting and art pottery produced in the city under the direction of Mary Louise McLauglin and of Maria Longworth Nichols Storer who founded Rookwood Pottery in 1880.

Later Friday afternoon, members of the U.S Fish and Wildlife Service Office of Law Enforcement led a seminar for Antiques Roadshow appraisers on the laws and regulations pertaining to endangered species, migratory birds and other wildlife – specifically items that may been seen by the antiques trade. Questions were wide-ranging and we had the opportunity to view and discuss seized materials.

Following the presentation and our pre-show meeting, all of the Antiques Roadshow appraisers and crew traveled to a local auction house for a private cocktail reception celebrating Antiques Roadshow’s visit to Cincinnati.

On Roadshow trips, I always try to go to local museums and historical sites to  learn something about the history of the region. This is almost always informs my appraisals and I was lucky at the Antiques Roadshow filming on Saturday to film an item nearly identical to one on display in the Cincinnati Wing.

My next stop in the tour? Seattle, WA on August 18th. Follow our adventures on the road on Facebook.

One thought on “36 Hours with Antiques Roadshow in Cincinnati, Ohio: The Queen of the West”