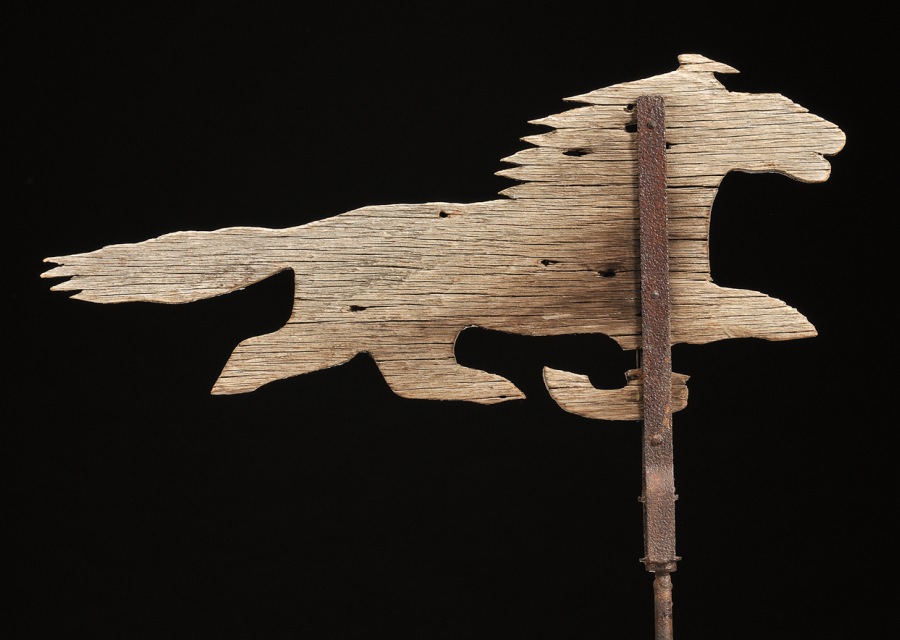 When you see a nice rooster or running horse weathervane with great original surface, you might comment, “What fabulous folk art!”

In reality, most antique weathervanes that collectors buy and sell were actually manufactured in large quantities and marketed to the general public. These weathervanes do not fit the traditional definition of folk art, or objects made by a person who wasn’t academically trained working in an isolated area.

We still have examples of the sales catalogues from companies such as W.A. Snow, Puritan Iron Works, and A.L. Jewell & Co. Weathervanes were manufactured and gilded with gold to be displayed on the roofs of barns and carriage houses. A weathervane served a clear purpose– to tell the direction the wind was blowing– but it was also a “cherry on the sundae,” one might say. It was meant to look impressive. The weathervane was the pinnacle of a house, the final architectural element to adorn a building.

But not everyone bought their weathervane out of a catalogue. Some vanes are true folk art, fashioned by the homeowner or farmer who needed one but for whatever reason didn’t buy, or couldn’t afford, an expensive gilded weathervane. 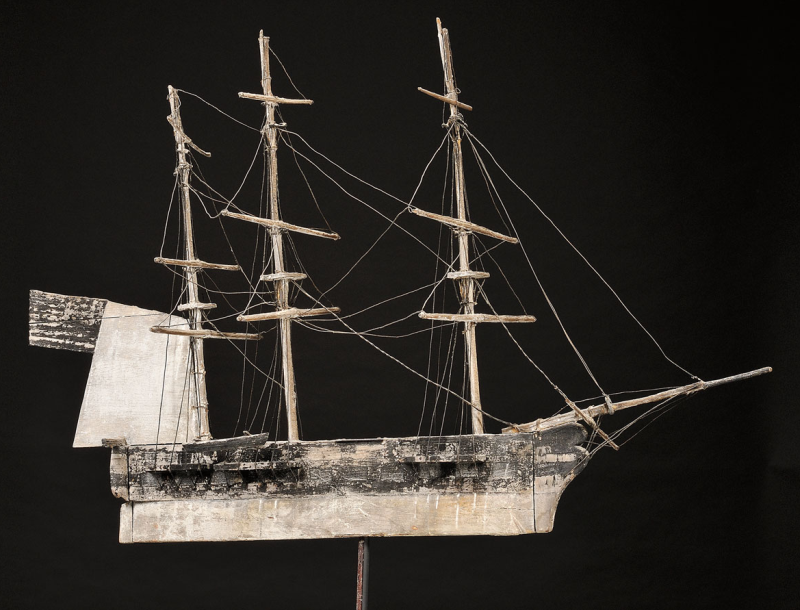 Lot 125 in the August 14, 2011 American Furniture & Decorative Arts auction is a handmade running horse weathervane that I love. The person who made it got everything right. It’s cut from a piece of soft wood, and it’s very weathered. The fact that the grain of the wood runs horizontally makes it look like the horse is streaking through the night. A few pieces of the horse’s body are missing, but for my taste this doesn’t hurt the form at all–you wouldn’t dismiss the Venus de Milo because the arms are gone. The running horse is a beautiful example of a folk art weathervane. Another great example is lot 36, a full-bodied wooden ship weathervane complete with wirework rigging and a lifeboat.

Steve Miller says in his book, The Art of the Weathervane, “Beauty is many things to many different people, and one should look upon a weathervane as one looks at any sculpture.” In some cases, true folk art weathervanes almost look like modern art, because they suggest a form without a lot of realistic detail.

Whether an antique weathervane is handmade folk art or a company-produced product, the beauty of its form, its condition, and the evidence of age on its surface are the most important factors to consider before a purchase. See Part I: Horses, Roosters, and Cars… Oh My! for more tips on collecting weathervanes.

We’d love to know which weathervane in our August American antiques auction you find the most appealing. You can preview the collection in Marlborough, MA, August 10th to 14th .
CONSIGN A WEATHERVANE

2 thoughts on “Antique Weathervanes, Part II: Folk Art or Not?”