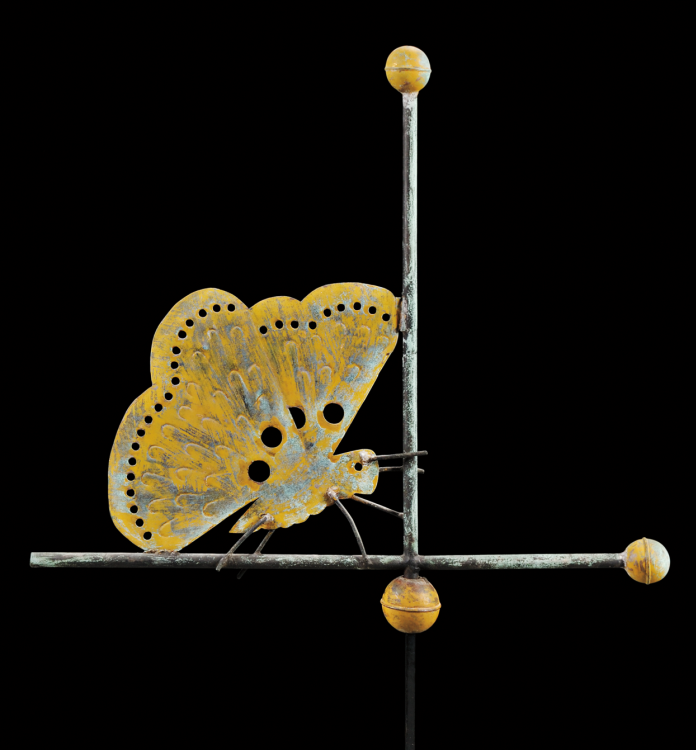 Collectors of American antiques love weathervanes. In fact, people love them so much that during the 60s and 70s antique weathervanes started disappearing from roofs across America. Thieves were stealing the valuable vanes in the middle of the night. I heard stories of weathervanes being stolen away by helicopter – they swooped down and lifted weathervanes off of barn roofs.

Now, people display antique weathervanes indoors—either mounted on a wall as folk art, or as a sculptural element in a room. Weathervanes come in a multitude of forms. As you can see from the photo, we have quite a menagerie at Skinner, waiting to be sold at upcoming our American Furniture & Decorative Arts auction on August 11th and 12th. Horses and roosters are among the most common weathervanes we see, but even within these categories the variety is endless. In this sale, we’re offering a wonderful example of a Black Hawk horse vane in molded copper, and we also have a rare butterfly weathervane, both from the private collection of Cheryl and Paul Scott.

When these weathervanes were first produced, most were gilded with gold. I’m sure they looked very impressive when they were brand new and sitting on top of a barn or town building. But weathervanes, of course, are subjected to weather, and after years of rain and wind and snow, the gilding wears off. The base coat of paint, called yellow sizing, starts to show through. Beneath that is bare copper, which can turn a rich, beautiful verdigris color.

Collectors are most attracted to antique weathervanes that still have their original surface, and these are the most valuable weathervanes. It’s a mistake to re-gild or re-paint an antique weathervane. In the book The Art of the Weathervane, Steve Miller says, “The form and beauty often are greatly enhanced by the ravages of nature upon its surface.”

We’ve sold weathervanes with fabulous surfaces that have had big bullet holes through them; they still brought a lot of money. Weathervanes were sometimes used for target practice, and as long as there aren’t too many bullet holes, it’s not necessarily going to matter too much—as long as the weathervane has great original surface. 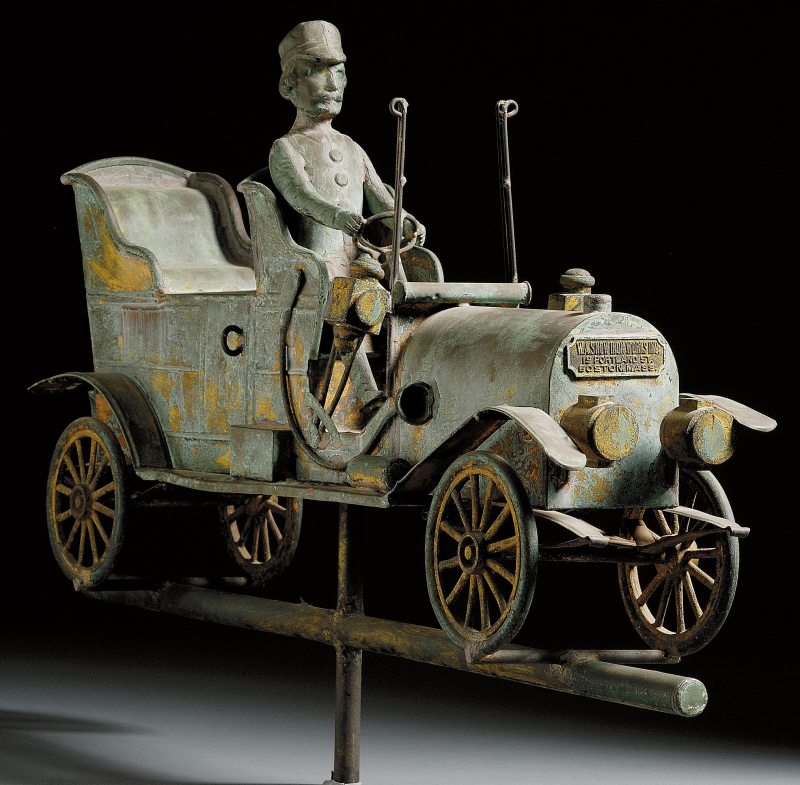 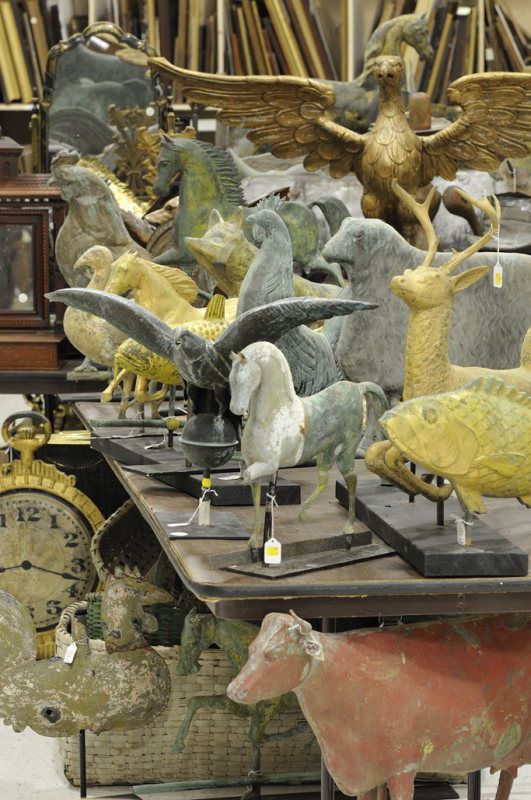 These weathervanes sold in a 2011 American Furniture & Decorative Arts auction

Skinner’s record for a weathervane at auction is $941,000, for a 1910 Open Touring Car, which sold in 2010. It was a rare, full-bodied automobile weathervane with incredible surface. The owners had taken it down and moved it indoors in 1960, so that saved the surface 50 years of wear and tear. As a result, it was in very good condition.

You have to be careful when buying weathervanes because there are some very fine reproductions. People have become very adroit at applying surfaces that look old, but aren’t. My advice is to always ask—a good antiques dealer or auctioneer will tell you everything he knows about the originality of the surface. We’d love to answer your questions at the American Furniture & Decorative Arts auction preview in Marlborough, MA, August 9th through 12th.

Read more about antique weathervanes in Part II: Folk Art or Not?

15 thoughts on “Antique Weathervanes, Part I: Horses, Roosters, and Cars… Oh My!”