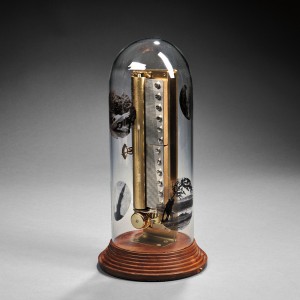 I first met Annette Lemieux in the 1980s, when she was a rising art star in New York and I was director of the Barbara Krakow Gallery in Boston. We became good friends, and worked on a number of projects together. In 1993 she asked if my company, Daniel Elias Editions, would publish her entry in the invitational Music Box Project, organized by Claudia Gould in collaboration with Reuge Music of Sainte-Croix, Switzerland, a maker of musical works for music boxes. Artists included Vito Acconci, Coop Himmelb(l)au, John Cale, Kiki Smith, Christian Marclay and others. The exhibition toured the United States, Europe and Japan.

The imagery of this artwork is powerful, even more so today than when it was first published in 1994. The bell glass and precision-crafted base and works convey classical beauty, mechanical intricacy and an Enlightenment-era sense of optimism and perfectibility, which is echoed by the restrained and formal perfection of Vivaldi’s The Four Seasons – selections from which are played by the cylinder. These attributes contrast with the photographic images on the bell: scenes of natural disasters — floods, hurricanes, the blizzard of 1978 in Boston, and other instances of nature unleashed — baked onto the glass. As time has gone by and the depredations of weather-related catastrophe have mounted, this piece gains the aura of prescience.

The mechanical works at the heart of music boxes are made in a variety of standardized types and sizes, depending on several factors: the size and number of the “combs,” or the toothed steel bars that produce tones when plucked by pins arrayed on the main cylinder, and the number of tunes that can be played. A “sublime harmony” musical works carries a matched pair of combs; one carrying the tune while the other supplies the harmonized accompaniment. In this case, three sections of Vivaldi’s work are encoded on the cylinder. Each time the activator is pressed, a new selection plays, producing an almost magical impression that the machine is choosing which tune the listener will hear. Lemieux, enchanted by the name of this model of musical works yet aware of the ironic contrast with the reality around her, took the description for the title of the artwork, Sublime Harmony.

Following Annette’s design and imagery, many craftspeople participated in the construction of this work. Bay State Metal of Boston forged and finished the brass L-shaped stanchion that holds the works. The images were collected and chosen by Annette, and screened as glass enamel decals by Sproson Designs, Hawley, PA. Clematis Machine Shop of Waltham machined the walnut base and push-button linkages, and Gerhard Finkenbeiner, also of Waltham, formed the glass bell jar and placed and fired the glass enamel images. I assembled and finished the pieces by hand, and Annette signed and numbered them with an engraving tool on the underside.

Annette has a subtle and ironic intelligence. This piece demonstrates that beautifully. I’m delighted that it’s coming up for bid in the September 20, 2013 American & European Works of Art auction and will watch the action with interest.