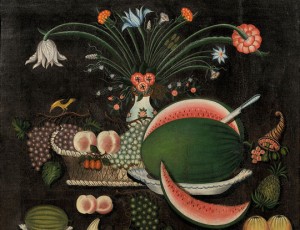 Known the world over for his smooth voice and timeless charm, Andy Williams entertained generations through his music, television, and theater. Born in Wall Lake, Iowa, Williams and his brothers worked their way to successful careers in the entertainment industry in the 1940s and 1950s. With hits like “Moon River” in 1962, Williams established his solo career, which took him into the homes of millions through his television series “The Andy Williams Show,” as well as his eponymous Christmas specials. In an era obsessed with rock and roll, Williams established himself as a singer of the American songbook. He recorded the classics with great sincerity and depth, producing work with enduring popularity.

With a successful performing and recording arts career under his belt, Andy Williams began building a focused collection of visual art. Alongside modern American paintings, American Indian artifacts, and pre-Columbian art, he put together a distinctly beautiful distillation of American folk art. Gathering prime examples of weathervanes, shop carvings, and paintings, Andy highlighted some of the most distinctive and striking characteristics of American popular and untrained art. He was known in the art world for his keen eye and impeccable taste, and his folk art collection proves both.

Skinner is proud to offer this collection at our American Furniture & Decorative Arts auction in Boston on March 3, 2013.

In the realm of paintings, Williams’ interest in modern art seems to have informed his folk art selections. The bold sense of light and color displayed in each is remarkable and is not unlike the work of the modern masters whose work he also collected. Ranging from childhood portrait to still life to aerial landscape, each painting in this group has a commanding presence and represents the best of American folk art produced in the nineteenth century.

Portraits by Ammi Phillips (1788-1865) display the dramatic, pensive use of light and bold arrangement of color for which the artist is so well-known. Most notable in the group is his double portrait of the Ten Broeck twin boys, where Phillips kept his composition spare in order to draw immediate and unflinching attention to his sitters’ faces. Another iconic image in the group is Phillips’ painting of a young boy in a pink dress with his pet spaniel, a combination that marks his most beloved childhood portraits.

Other works include one of John Rasmussen’s Berks County Almshouse paintings. Rasmussen (1828-1895), a resident of the almshouse for his latter years, was one of three artists known to have produced striking, intricate views of the agrarian complex, which included its own creamery, bakery, and slaughterhouse. It is thought that these paintings were produced for sale to employees of the house, and those that survive are prized documents of a social welfare system that attempted to care for the poor, ill, and parentless residents of Berks County, Pennsylvania.

A large still life, thought to have been painted by a little-known African-American artist living in New York named Joseph Proctor, displays the exuberance of line and color that marks the best American folk art paintings.

Three-dimensional objects from the collection include a superb pair of Ward Brothers Widgeon decoys, carved in Maryland in the early 20th century, whose color and carving render them nearly life-like. A race-track tout from late nineteenth century New England shows off the best of shop-figure carving with a confident stance, ready cigar, and flashy suit. Based on his stance, clothing, and carving style, it is possible that the polychrome tout is the work of figure carver Charles Parker Dowler. Radiating and air of confidence and success, this tout is a particularly charming example of the type. Williams’ group of weathervanes encompasses iconic forms such as the so-called Index Horse as well as the more unusual pig and ewe.

In this small but splendid collection, Andy Williams assembled a group of objects that demonstrate the reasons for the enduring appeal of American folk art. Join us on March 3rd, 2013 in Boston for the Skinner American Furniture & Decorative Arts auction featuring the Andy Williams Folk Art Collection.

6 thoughts on “A Keen Eye, Impeccable Taste, and Timeless Charm”