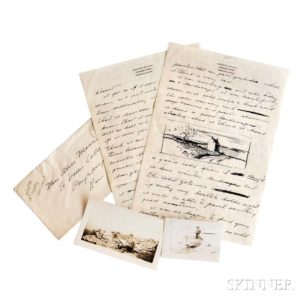 An extensive archive of letters previously unknown to scholars and collectors concerning one of the most secretive and celebrated American artists of the 20th century will be offered in Skinner’s May Fine Books & Manuscripts online auction.

The 43 letters were sent to Vassar College graduate, Alice Moore, the daughter of a Baptist minister in Poughkeepsie, between August 1937 and March 1939. They provide a rare insight into the private world of a young Andrew Wyeth, whose cosseted upbringing had kept the twenty-year-old sheltered from much of the outside world. The youngest child in an art-loving family, Wyeth did not attend school, receiving art and cultural instruction at home from his father, the artist and illustrator N.C. Wyeth. 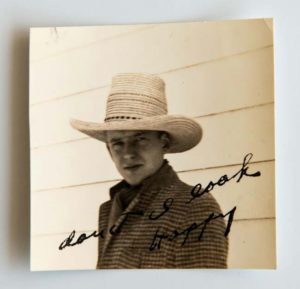 These letters record many details of Wyeth’s earliest romantic relationship, which lasted for approximately two years. The period coincides with Wyeth’s emergence as a prominent force in the art world, while he was between the ages of 20 and 22. They begin a few months before his first show at the Macbeth Gallery in New York (October 19-November 1, 1937) and end at about the time Homer Saint-Gaudens extended an invitation to Wyeth to exhibit one of his tempera panels at the 1939 Carnegie International exhibition of contemporary art in Pittsburgh. At the time, Wyeth was the youngest artist ever invited to exhibit.

The love affair is characterized in the letters by Wyeth’s great yearning for Moore’s companionship and his strong desire to marry her. He seems most preoccupied with proving that he can make a success of himself as an artist so that he can ask for her hand.

The other predominant relationship theme in these letters is Wyeth’s feeling of insecurity regarding Moore’s love for him. He repeatedly states his belief that she doesn’t love him or his fear that she can’t love him. In one stormy letter (described as such by Wyeth himself), written on October 21, 1938, he declares, “Oh God! If I was only a man that you loved not for his art but for himself alone, then I would be happy. Go ahead and laugh but you know that I am telling the truth. You are no more in love with me than I am with this table I am writing on. You are in love with what I might do in this world and that’s what kills me.” He writes again with contrition, five days later. “You certainly told the truth when you said I am an idiot. When I wrote you that letter I had been trying to do some painting along with jury duty and what I painted was just terrible and I lost my temper with everything. I don’t want you to believe a thing I said against you in that letter and if I hurt you I only pray to God you won’t hold it against me long.” 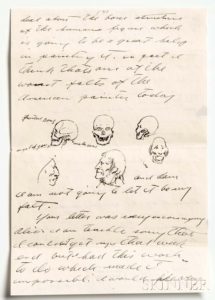 In addition to the romantic content in the letters, Wyeth also includes much detailed information about particular works of art, his working habits and moods, his travels, social life, and reading. Wyeth writes about using egg tempera. “Well, I have been working in egg tempera for the last two weeks and by God, I like it.” He writes about his portrait of the Maine fisherman, Charlie Ervine. “[I] am now working on a portrait of a fellow who to me expresses Maine of today. Mr. Sidney Chase the artist who lives in Martinsville can’t seem to understand why I should want to paint the worst drunk in Martinsville, but as I told him, I am not interested in painting the picturesque Maine of yesterday but want to paint it as it is today and to me this fellow is typical of Maine of today. [Then he adds the following note.] Thursday I went to the Union Fair and had a swell time, went up with several fellows from the port. Mr. Ervine went also and passed out. I will tell about it when I see you.”

Wyeth describes his habit of working, the look of the sea in Maine in the winter, the colors of the wet landscape, and how the buildings stand out in distinction, and other personal details of his work. “Friday I found a dead gull on the shore in front of my studio. He was so beautiful I took him in to the building and hung him up and painted a picture of it, and I think it’s a good one. They are really to me one of the most stunning-looking birds I know. Have you ever looked at one closely? I did a watercolor of it first but I didn’t get what I wanted so I did it in tempera.”

The artist is precociously self-conscious of his status as a young painter, and what he hopes is to come in his career. “The work I have done this summer means nothing to me. In fact, I hope I never see it again. I have not started to paint yet. I am only building, and that takes so long, by the time I am ready to paint I will be too old to do it.” 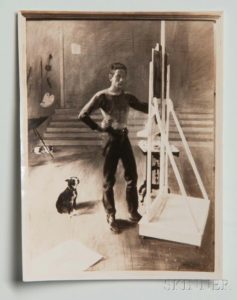 The extent of the content (approximately 13,000 words), the intimate nature of the communication between these two parties, and the relatively sparse information on the artist from this period combine to make this archive a substantial resource. Almost every letter is accompanied by its original envelope, included with some letters are press clippings, show catalogs, small black-and-white reproductions of some of Wyeth’s work from print media, and a snapshot of Wyeth, with many items inscribed in Wyeth’s hand.

The basic information one gleans from the letters is at odds with Wyeth’s biographical record. In Richard Meryman’s Andrew Wyeth, a Secret Life, Alice Moore makes a brief if altered appearance. She is described as ten years older than a seventeen-year-old Wyeth, whereas she was a 1935 college graduate, making her only three or four years older. The relationship was said to have been kept a secret from N.C. Wyeth, although Moore clearly visited with the family in Chadds Ford on several occasions. In further support, the archive also includes two letters addressed to Moore from Wyeth’s mother, and two others from his sister Carolyn. Finally, Meryman states that Wyeth broke off the relationship with Moore when she suggested marriage, which, based on Wyeth’s own words in dozens of letters, is patently untrue.

The last letter to Moore is dated March 24, 1939, and gives no indication of an impending break-up. The relationship ended, although by which party we may never know. Wyeth met seventeen-year-old Betsy James on July 12, 1939, and married her less than a year later, on May 15, 1940.

Because the complete range of content cannot be easily described in this space, transcriptions of the complete archive will be made available to any interested parties.

The online-only auction will open for bidding on Tuesday, May 23 at 12PM with lots beginning to close on Friday, June 2 at 10AM. Public auction previews will be held in Skinner’s Marlborough, MA Gallery on Tuesday, May 30 from 12-5PM and on Wednesday, May 31 from 10AM-6PM.