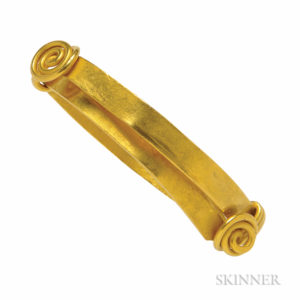 It’s pretty unusual to see a piece of ancient jewelry come up in one of our Fine Jewelry auctions, so when we do it’s always exciting.  Lot 23 in our September 19 auction is a 2nd-century Roman bracelet, and I love everything about it. It’s almost 2,000 years old and is still so wearable and stylish today. Dare I even say that it is reminiscent of Alexander Calder’s jewelry?  By the 2nd century, a combination of the rejection of previous policies on austerity and the increase of the availability of gold saw restrictions on the ownership of jewels lifted. Gold jewelry quickly became a status symbol among the Romans, and in the Satyricon Petronius discusses the great lengths citizens went through to outdo one another. This bracelet certainly foots the bill even today!

Also of note are Lots 24 an ancient bead necklace, and 25, a Western Asiatic bead necklace from the 3rd-2nd millennium BC!

We more commonly see coin-mounted jewelry: however this does present a difficulty in dating accuracy- ancient coins were commonly reproduced during revival periods. One of the key factors in examining coins is being able to see the edge, and coins are commonly bezel set in jewelry. Our current Fine Jewelry online auction features several coin-mounted jewelry items, including Lots 1264, 1267, and 1269.  The coins are likely Alexander the Great tetradrachms, which depict Hercules wearing the skin of the Nemean Lion on one side, and Zeus enthroned on the other.  The settings are modern. One silver Tetradrachm would have been about four day’s pay for a common laborer, and would have been used for substantial purchases in the Ancient Greece. Another favorite of mine is Lot 1268, a coin-mounted ring, and is possibly an Alexander the Great stater.  The coin depicts a helmeted Athena on one side, and Nike on the other, the two powerful female figures contrasting nicely with the male figures on the Tetradrachm.

I invite you to take part in our Fine Jewelry auction on September 19, and our online-only auction which is open now until September 20th, where one of these ancient treasures could be yours!