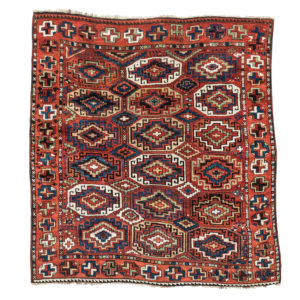 Samy Rabinovic was born in Istanbul in 1940, and grew up in a house filled with rugs (his uncle was Director of the Anglo-Persian Rug Company), but felt no particular attraction to them. His real passion at the time was chemistry. After obtaining an advanced degree in Polymer Sciences from the University of Massachusetts in 1969, Samy worked for Rohm and Haas (now owned by Dow Chemical) for many years, becoming head of Research and Development in their Plastics Division in France from 1975 through 1984. The work was creative and intellectually engaging, but still left him enough time to explore the antique shops of the French countryside, and what he found himself more and more drawn to were Caucasian and Turkish rugs, especially early Anatolian village rugs. After meeting Dr. Harold Bohmer (a fellow chemist) at the 1983 London International Conference of Oriental Carpets, he realized that he had met his mentor, someone whose discernment, taste, and deep knowledge of dye-craft was to inspire him for the rest of his life. In 1995, Samy retired from his R&D work and began his second career: leading tours throughout Turkey, focusing on Ottoman history and the development of Anatolian village weaving. The results of that passionate exploration are, happily, embodied in Samy and Sara’s collection. As Samy himself puts it:  “In a really good village rug, you can see the whole story of 10,000 years of bostonAnatolian civilization.”

This event is free and open to the public. refreshments will be served.