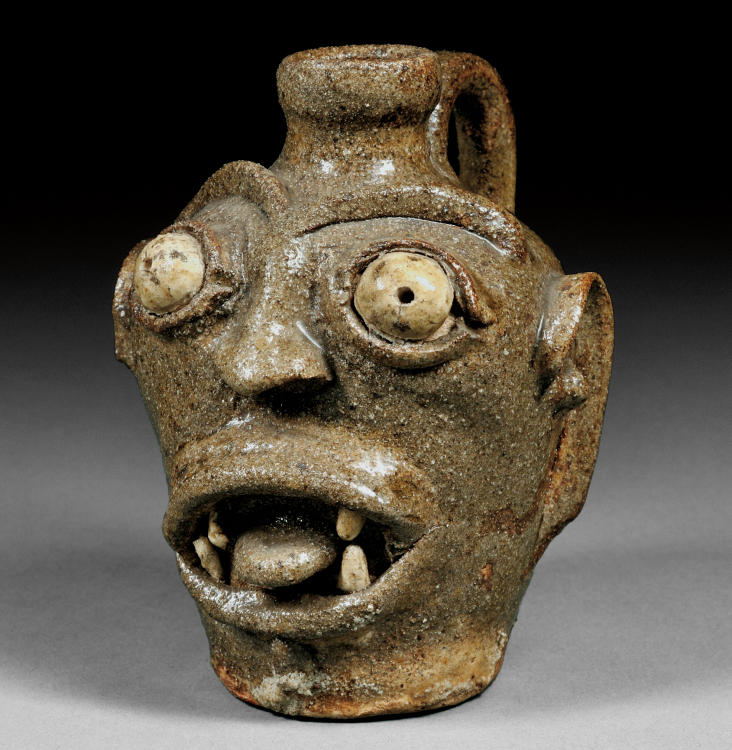 When I first set eyes on this face jug, it was tucked inside a glassed-in bookcase alongside dishes, books, and other everyday things. I took it out, and said, “This is terrific! It’s beautiful!”

Beautiful might not be the first word that comes to everyone’s mind when looking at a grotesque face like this one, but I knew the jug was something special. I loved the diminutive size—it fit in the palm of my hand—plus the fact that it survived from the 19th century with no damage. It wasn’t even dusty.

It wasn’t until we’d taken the jug back to Skinner Auction House when specialist Karen Langberg found a note tucked inside the jug that read, “Monkey Jug= made at Bath S.C. 1862 by negro slaves/Aiken S.C.”

I asked the consignor about her great-grandfather who had collected the jug and written the note. We learned that he had most likely acquired it in the late 19th or early 20th century, just a few decades after the piece was made. The fact that he saw fit to acquire this unique example of an African-American face jug shows a developed aesthetic sensibility. The fact that the jug survived all this while undamaged is miraculous.

Further research into the history of the jug led us to two articles from the 2006 issue of Ceramics in America, published by the Chipstone Foundation. In the article titled “Fluid Vessel:  Journey of the Jug,” pp. 93-121, John A. Burrison discusses the history of early Southern face vessels made by enslaved African-American potters. He proposes that face jugs like the one we discovered were likely influenced by anthropomorphic clay vessels made in West Africa, the chief source of the Atlantic slave trade.

A related article in the same issue titled “Making Faces:  Archaeological Evidence of African-American Face Jug Production,” by Mark M. Newell with Peter Lenzo, pp. 122-138, discusses the origins and use of pottery face vessels. The article states that the larger face jugs were used “as water vessels called ‘monkey’ jugs-after monkeyed, a southern term for the dehydrating effect of the summer heat.”

Small jugs such as the one sold at Skinner have aroused curiosity as to their use, as they were so small that they would not hold much liquid to quench a thirsty person.  The Newell and Lenzo article also mentions the 1909 interview by early American historian Edwin AtLee Barber with a South Carolina plantation pottery owner, Colonel Davies, who commented that the small jugs were used by the slaves “for their own purposes,” inferring a connection between the jugs and possible religious or ritual practices.

Although the original purpose of the jug may remain a mystery, the fact remains that it’s a wonderful piece of sculpture with an amazing story. It was one of my personal favorites in the March 4, 2012 American Furniture & Decorative Arts auction at Skinner, and I’m thrilled with the $56,287.50 price realized.

3 thoughts on “The Stoneware Face Jug: A Treasure Hidden Away for a Hundred Years”