Excerpted from “Time and the Objects of our Desire” by Thatcher Freund, www.thatcherfreund.com, originally published in New England Monthly, May 1989. 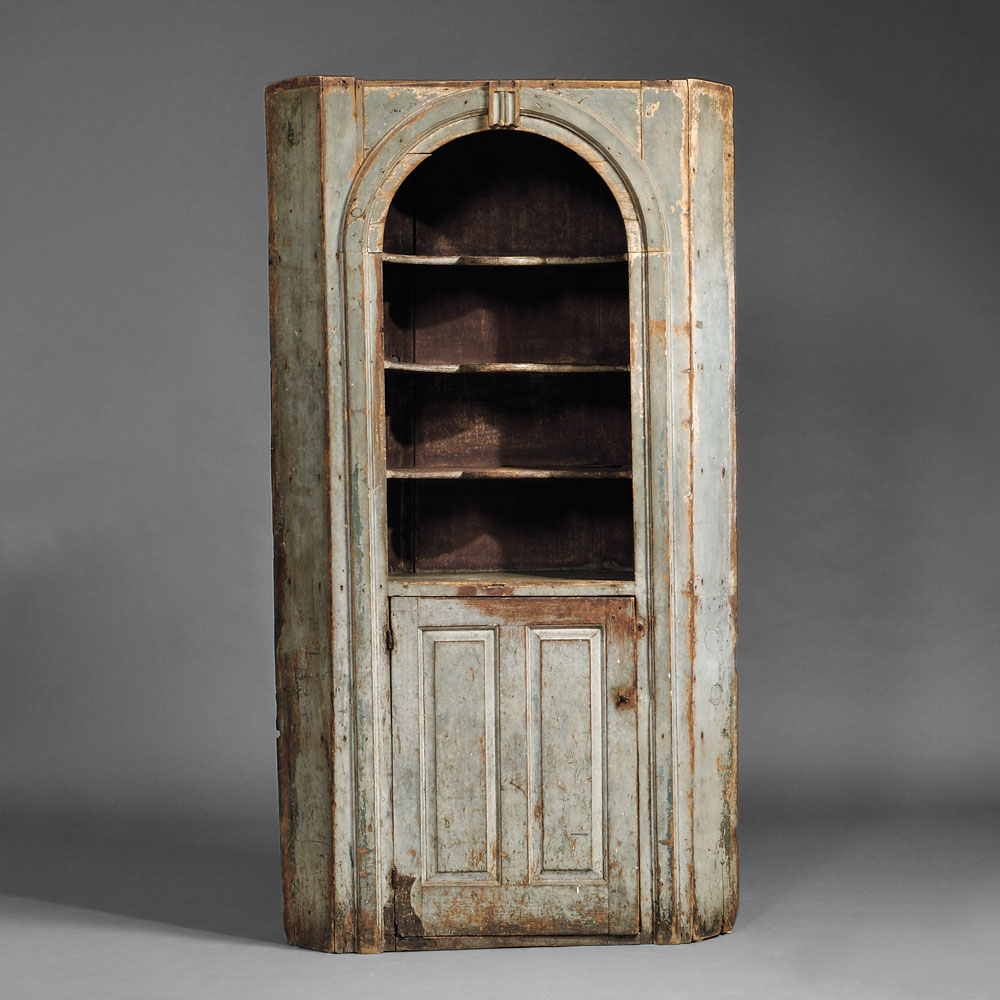 One day, sometime around 1750, a carpenter laid down his tools, and the corner cupboard was finished. This cupboard was especially pretty. Its proportions, its arched opening, its nicely detailed molding and the raised panels on its doors – these gave the cupboard an elegance not usually found in others of the period. It was painted blue-green. Those who study such objects guess that the corner cupboard was built into the dining room of a house in southeastern New Hampshire, but very little is known for certain about its early history. It’s possible the cupboard was painted to match the sea. It might have belonged to a prosperous farmer or a Portsmouth merchant.

Like many things made by human hands, the cupboard eventually fell from fashion. If you were a merchant living a good life in the 1830s, you preferred heavy and important Empire furniture. Not many early painted cupboards survived the changing styles of the nineteenth century. The blue-green cupboard might have easily been wrecked, but it never was. Perhaps it survived because of its beauty, a quality that can be even more useful to things than to people.

The cupboard did not arrive at the twentieth century in pristine condition. The corners had worn smooth from the touch of many hands. A gaping hole (which someone had covered with tin) had appeared at the lower edge of its door, the result, apparently, of a determined animal with good teeth. The moldings around its arched opening had once sprung loose, and whoever tacked them back had failed to make the lines clean again; the piece had the unsettling look of a man with a limp. The cupboard was a mean thing to most eyes, rough and dirty and beaten.

One day in the mid-1960s, Dick Wiggins and his son David discovered the cupboard in the kitchen of an old New Hampshire antiques dealer. The woman had probably rescued it during the 1920s, when Americans began to appreciate objects from their Colonial past. Though she had owned it for decades, the dealer was willing to part with the cupboard when she was offered what was a considerable sum then: about $500. It was an odd piece of furniture, worn and filled with mystery that suited the Wigginses’ taste. Dick and David thought they might keep the cupboard for themselves because it had looked so good in the old dealer’s kitchen. But the longer it sat in Dick Wiggin’s house, the less it seemed to fit.

Read the full article: “Time and the Objects of our Desire” by Thatcher Freund, New England Monthly, May 1989.

Where is it now?

Starting with Dick and David Wiggins, the cupboard began a journey of over three decades, passing through the hands of various antiques dealers who each left an impression on the piece. The cupboard now waits to be sold on August 10, 2014 at Skinner’s August Americana auction in Marlborough, where it will begin the next phase of its journey. Read the full article to learn more about the cupboard’s unique history.