A few months ago, I wrote a blog post titled “Welcome to Grunge School: Where you Learn to Leave Original Surface Alone.” Those of us who have been immersed in the antiques world our whole lives all know horror stories of wonderful relics that were lost to naïve or over-exuberant refinishing or repainting. Here is a story that was left as a comment on my blog post. It makes me cringe to read it:

The Cherry Sugar Chest and the Friendly Gesture 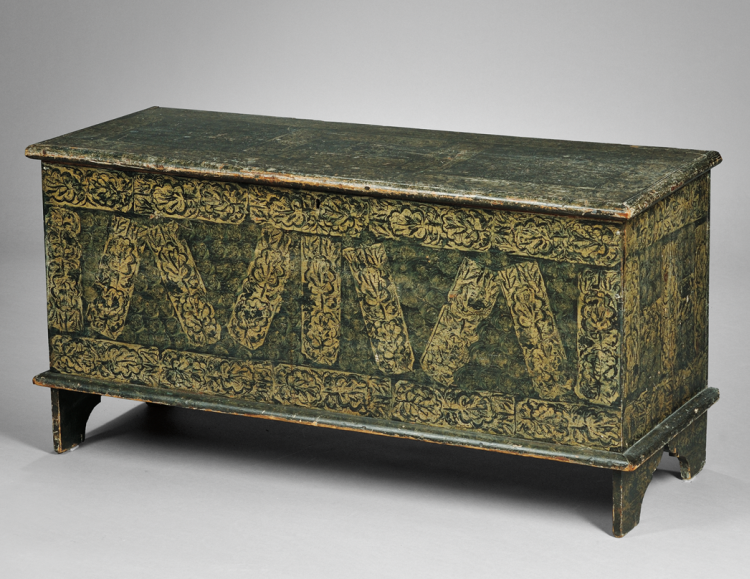 This example of a blanket chest with original paint-decorated surface is Lot 441 in the October 30, 2011 American Furniture & Decorative Arts auction.

“Unfortunately, this reminds me of a very nice, all original cherry sugar chest I once owned. Being in the deep South, I was pleased to acquire it MANY years ago for under $100. It had nicely turned legs, great patina, a secret interior locking drawer, etc. The only problem was a missing breadboard end on the top. So, after some years I took it to a “craftsman” who had been in the antiques business for many years, and who ran the shop for a long-time major dealer. Unfortunately, this dealer had a habit in the 1960s and 70s of refinishing much of his furniture. Guess that’s why he had such an active shop. It was a much more accepted practice then and the public seemed to be OK with it. My craftsman friend had retired and ran a little repair shop of his own. I left the sugar chest with him to have a breadboard end created and then went to pick it up several weeks later. I nearly fainted and was momentarily speechless when I saw it. He proudly announced that because of our longtime friendship, he had refinished it for me… at “no charge!” What can you say at that point? He was taken aback that I obviously wasn’t thrilled. I was so numb with disbelief that I don’t even remember what I said. Needless to say, I never viewed the chest with the same feelings, and finally sold it rather than forever being reminded of this sad event.”

After I mourned the loss of another beautiful antique in original condition, I started to think back on other stories from my years as director of American Furniture & Decorative Arts at Skinner. I remember one time at an auction preview, a woman asked me about an old Connecticut Queen Anne dining table that still had its original black painted surface. She wanted to know what wood the cabinetmaker had used, and was rather incredulous when I told her I thought it was cherry, but I wasn’t sure.

Despite my attempts to explain that the black-painted surface was quite extraordinary, she still didn’t like how it looked and thought the table should be refinished. Finally, I told her, “You don’t want this table and you shouldn’t buy it,” which might have slightly offended her. At least she didn’t buy the table, and to my knowledge it remains untouched. 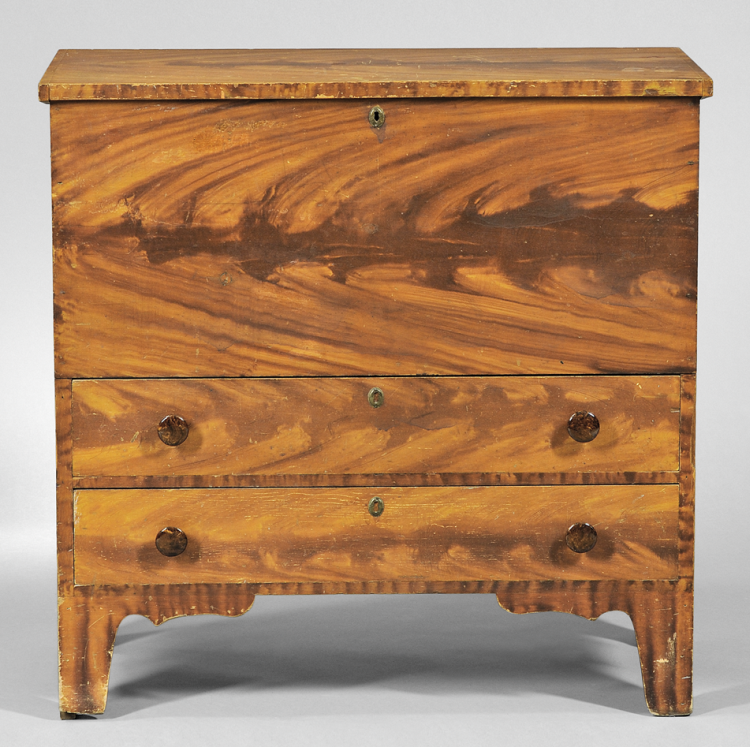 This grain-painted chest over two drawers, lot 459 in the October 30, 2011 American Furniture & Decorative Arts auction, still has its original paint.

Another story that didn’t end so well was told to me by a late dealer I knew. He had gone to a furniture refinishing warehouse, and in the room where they dip the furniture in lye, he saw a mid-18th century Queen Anne dressing table. It had a fan-carved drawer, and original, untouched, red-painted surface.

He couldn’t believe someone would refinish such a treasure. He asked for the name of the people who had left it to be refinished, hoping he could talk them out of making this mistake by explaining the true nature of the piece they had in their family.

However, his comments to the owners fell on deaf ears. They thought the dressing table looked terrible, saying it was an heirloom that would never leave their family. The dealer then had the unfortunate and completely coincidental experience of going back and seeing the piece looking brand new.

Our next American Furniture & Decorative Arts auction will be on October 30th. Thankfully, there are still American antiques out there that haven’t been touched, and you can view them during our auction preview in Boston.