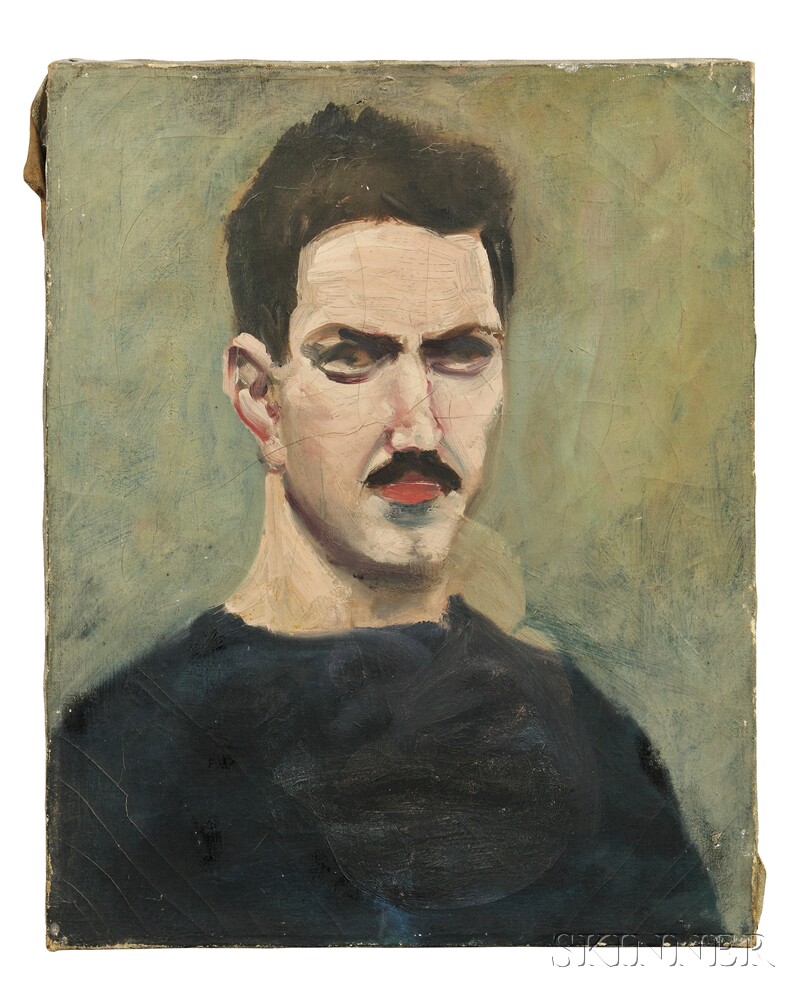 Alexander Calder was born in 1898, the second child of artist parents—his father was a sculptor and his mother a painter. Because his father, Alexander Stirling Calder, received public commissions, the family traversed the country throughout Calder’s childhood. Calder was encouraged to create, and from the age of eight he always had his own workshop wherever the family lived. For Christmas in 1909, Calder presented his parents with two of his first sculptures, a tiny dog and duck cut from a brass sheet and bent into formation. The duck is kinetic—it rocks back and forth when tapped. Even at age eleven, his facility in handling materials was apparent.

Despite his talents, Calder did not originally set out to become an artist. After high school he enrolled at the Stevens Institute of Technology in New Jersey and graduated in 1919 with an engineering degree. Calder worked for several years after graduation at various jobs, including as a hydraulics engineer and automotive engineer, timekeeper in a logging camp, and fireman in a ship’s boiler room. While serving in the latter occupation, on a ship from New York bound for San Francisco, Calder awoke on the deck to see both a brilliant sunrise and a scintillating full moon; each was visible on opposite horizons (the ship then lay off the Guatemalan coast). The experience made a lasting impression on Calder; he would refer to this imagery throughout his life. 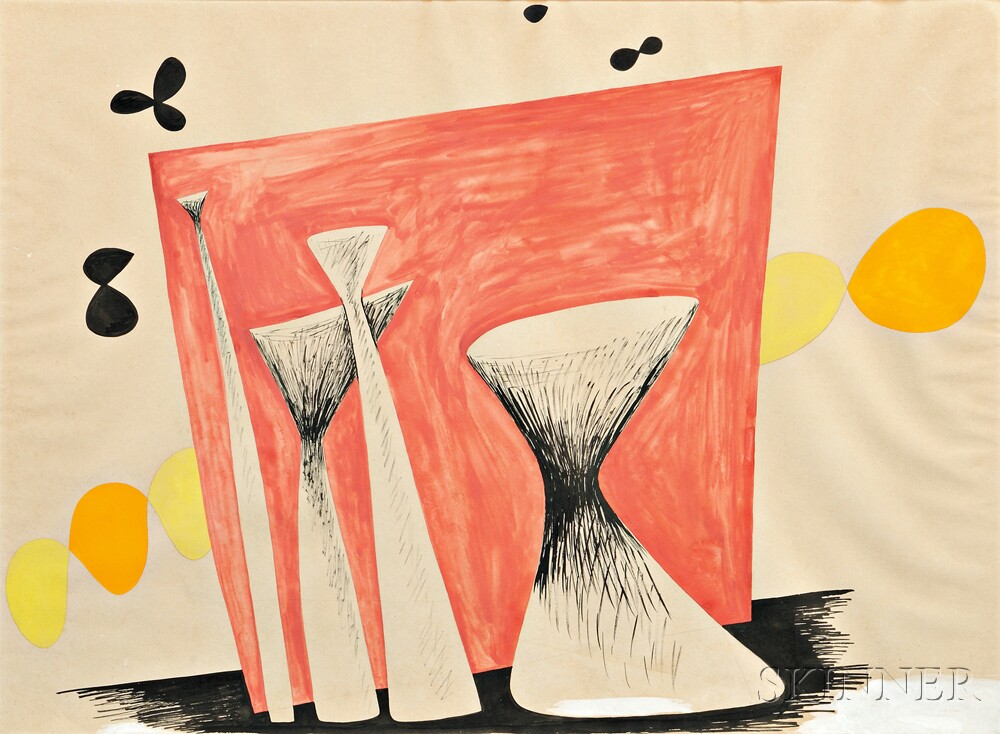 Calder committed to becoming an artist shortly thereafter, and in 1923 he moved to New York. The self portrait shown above (Lot 350) was done at this moment of transition, c. 1924. Here the artist is a dark-haired young man in his mid-20s, sporting a somewhat unfamiliar bushy mustache that one sees in photographs of the artist from the later 1920s, but not yet with the shock of white hair which we so often associate him. There is no mistaking the intensity of his expression. From January to April of 1924, Calder was enrolled at the Art Students League, studying portrait painting with George Luks, and one feels the influence of Luks’s strong brush work in this forthright, realistic portrait, sympathetic to the Ashcan School aesthetic. 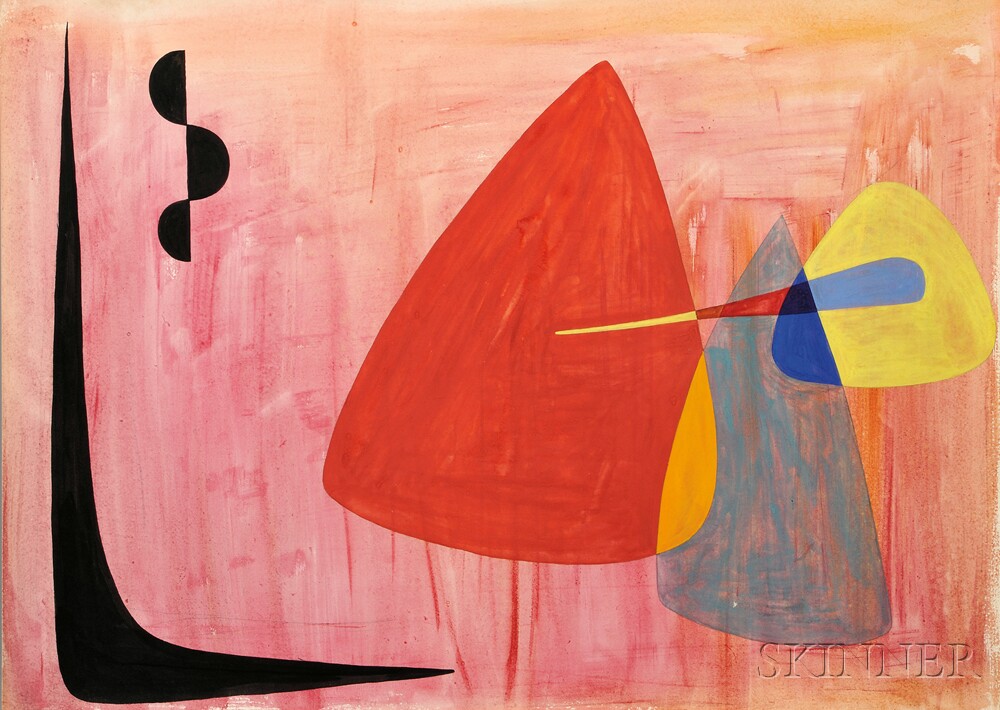 In the later 1920s Calder had his first solo gallery show in New York, followed by shows in Paris and Berlin, generating great interest in his work. He also became friendly with many prominent artists and intellectuals of the early twentieth century, including Joan Miró, Fernand Léger, James Johnson Sweeney, and Marcel Duchamp. In October 1930, Calder visited the studio of Piet Mondrian in Paris and had the chance to see that artist’s work. It was a revelation to Calder. On one wall of the studio Mondrian had posted a whole grouping of rectangles of various primary colors, and he would arrange and rearrange these papers continuously to experiment with compositions.  Mondrian’s palette and utterly nonrepresentational subjects challenged Calder’s entire approach. He recalled later in life that this experience “shocked” him toward total abstraction. Soon after, he was invited to join Abstraction-Création, an influential group of artists (including Arp, Mondrian, and Hélion) with whom he had become friendly. 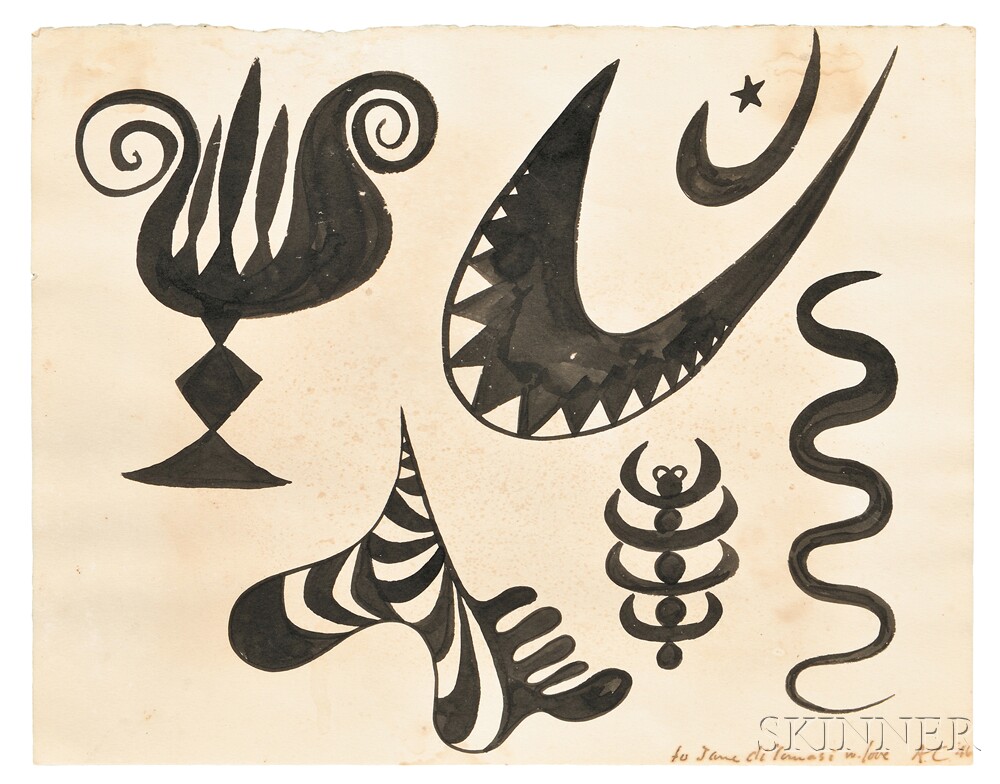 The 1940s and 1950s were a remarkably productive period for Calder, which was launched in 1938 with the first retrospective of his work at the George Walter Vincent Smith Gallery in Springfield, Massachusetts. A second, major retrospective was held at the Museum of Modern Art in New York just a few years later, in 1943. During the Second World War when materials were in tight supply, Calder tended to work in a smaller scale and created more two-dimensional works. The two colorful, untitled gouaches in the January 22 auction (Lots 384 and 385) date from c. 1942. In the first (Lot 384) Calder used geometric volumes placed in front of a red rectangle, set at an angle that skews our sense of space. In the second work (Lot 385), the geometric shapes have been flattened, and now overlap one another, changing color where the forms intersect. While recognizing Calder’s characteristic energy and joie de vivre, one can also see with these works the influence of surrealism, and it is interesting to note that Calder had a joint show with Joan Miró at Vassar College in 1942. In the small ink drawing dating from 1946 (Lot 383), the whimsical shapes so typical of the artist are arranged on the paper like silhouettes, the shapes somewhat reminiscent of Calder’s metal brooches or the designs of wool rugs from the 1950s.