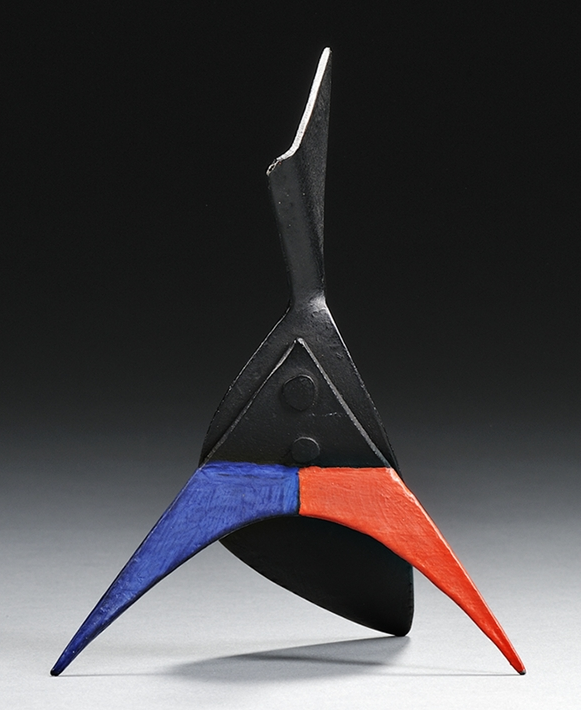 Alexander Calder was an artistic “jack of all trades.” He worked in metal, from jewelry to large-scale public works; he made paintings; was a theatrical set designer; and he was also a successful lithographer. What makes Calder so compelling in any medium is his wit and energy.

Calder invented the mobile (a term coined for his works by Marcel Duchamp), and is one of the best known kinetic sculptors. We expect his sculptural work to have movement, and interestingly that sense of movement also translates to his flat, two dimensional works, due to his use of color and line.

Consider the Calder brooch auctioned by the Skinner Fine Jewelry department in 2005. The artist cut the work out of sheet metal, then hand hammered it, and finally added a twist of wire on the back for a pinstem. Merely a spiral that stretches out into a squiggle, the form is lively and energetic. This energy is reinforced by the uneven, handmade appearance of the work, imbuing it with an immediacy that would be lost were the edges evenly machined.

This same energy and joie de vivre is embodied in the piece Void’s Edge, a Calder gouache from 1963, featured in the September 9th 2011 paintings auction in Boston. Here the geometric shapes are flat, yet space is implied through overlapping. The shapes themselves retain the imperfect edges seen in the brooch – they are painted free-hand, rather than delineated with a compass. In addition the saturated red, in conjunction with the black and white, gives the composition vitality. It is balanced and harmonious, yet at heart it remains joyous. 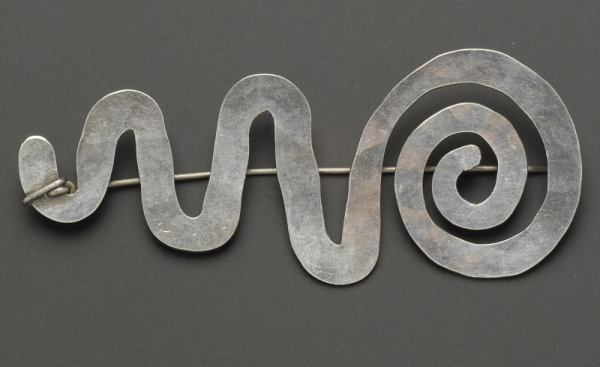 Alexander Calder’s sense of humor is evident in his whimsical jewelry pieces, his Cirque Calder works, and even in the little stabile sculpture Shoe with Split Heel, 1946, which will be auctioned on September 9th. The piece is a diminutive 4 1/2 inches tall, much smaller than it seems in photographs. Like Void’s Edge, it is composed of Calder’s typical geometric elements, and painted in his usual palette of primary colors and black, inspired by Mondrian.

In 1930, Alexander Calder had visited the studio of Piet Mondrian, and saw that artist’s work. It was a revelation to Calder. On one wall of the studio Mondrian had posted a whole grouping of rectangles of various primary colors, and he would arrange and rearrange these papers continuously to experiment with compositions. Mondrian’s palette and utterly nonrepresentational subjects changed Calder’s entire approach.

Of course Shoe with Split Heel isn’t totally nonrepresentational—the title inspires us to see a shoe in the sculpture, and the work does look like something that might have been designed in a Project Runway fashion challenge. Alexander Calder titled his work with a light-hearted nature that puts a twinkle in your eye, perhaps the same twinkle that was in Calder’s eye when he created the artwork.

Don’t you agree that Calder’s art could make even Ebenezer Scrooge smile? 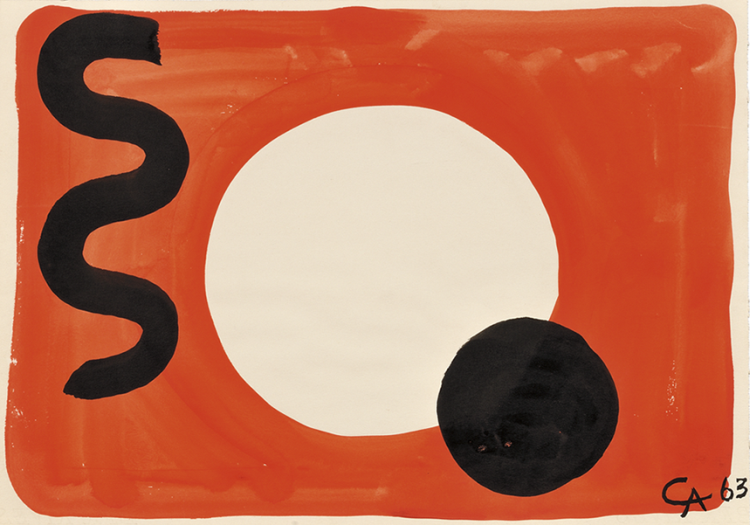