For many, Albert Bierstadt’s name is synonymous with grand panoramas capturing the awe-inspiring landscapes of the American west. However, the German-born artist actually had roots on the east coast, was raised in New Bedford, Massachusetts, and painted throughout New England and upstate New York. His works gained wide popularity in his lifetime, and by the mid-1860s he had constructed a magnificent home at Irvington-on-Hudson. For two decades Bierstadt continued to enjoy critical and commercial success, making him, along with his contemporary Frederick Church (1842-1924), one of American’s preeminent landscape painters of the period.

Bierstadt came to painting when in his early 20s, and traveled to his birth city of Dusseldorf in 1853 to study his craft.  By 1857, he had returned in the United States, opened a studio in New York City, and began painting landscapes of the White Mountains.  His method was to capture views en plein air in small oil sketches and drawings, where he proved himself to be a keen observer, and he was among the earliest artists to employ a stereo view camera to record a scene.  [One such oil sketch was sold by Skinner in September 2015 (pictured above).] Back in the studio, he would turn these sketches into large- scale oils, filling the canvases with precise detail but also enhancing the most picturesque aspects of the landscape to create dramatic effect. He developed a personal style which combined the romantic contemporary landscapes of Dusseldorf and the native Hudson River School. Bierstadt’s major western oils were massive, remarkable in both scale and detail, reflecting his philosophy that nature at its most sublime demanded a canvas of great size to convey its magnificence.  However he continued to paint wonderful, smaller scale landscapes featuring New England views. 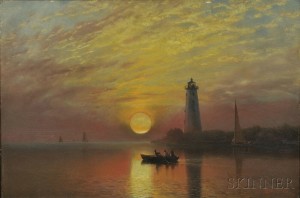 An easel size work, Lighthouse, Newport, Rhode Island (1878), featured in Skinner’s January 22 Fine Paintings & Sculpture auction, presents a coastal view of quiet waters. Bierstadt’s subject is the light of the setting sun, as it streaks the thin, high clouds and paints a bright, defined path across the water. Bierstadt’s eye for detail is expressed in the sharp angle of the light from the sun, low on the horizon, as it catches the edges of the clothing of the men rowing the small dory and, even more subtly, those in the sailboat on the right, highlighting their curved backs and defining the edge of the mast as a vertical line of gold.

2 thoughts on “The New England Landscapes of Albert Bierstadt”