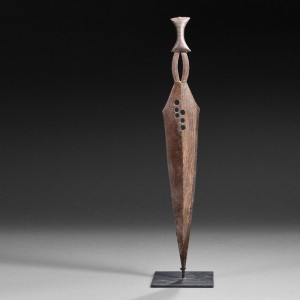 The circular holes and incised lines give this large Boa/Zande knife an Art Deco look.

The Zande of central Africa made and used knives in battle until the end of the 19th century. Later, they used these weapons as ritual objects. Members of the Mangbetu tribe in Zaire carried a sickle-shaped form to demonstrate their status, power, and prestige; the most valuable examples have ivory handles instead of wood.  Songye axes also served as tokens of wealth and authority. Specialists crafted these axes in a variety of sculptural forms.

Skinner is offering an excellent collection of African weapons in the June 19, 2013 American Indian & Tribal Art auction in Marlborough. Now is a great time to buy as these items are still relatively undervalued in the market. Though all of the weapons provide historical interest and look great in a modern setting, a few really stand out for their interesting design qualities. 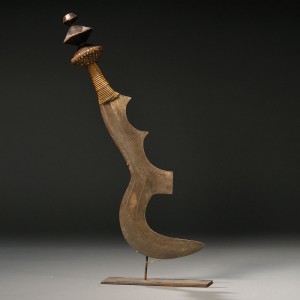 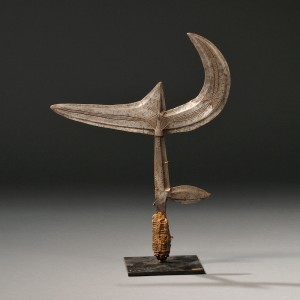 The modern-looking form of this Ngbaka throwing knife possibly represents an animal. The incised lines add another level of design interest.

I have a small collection of African knives of my own, and I display them just as I would any small sculpture. These weapons come in a great variety of forms and are considered to be true works of art. In fact, modern artists including Picasso found inspiration in African and tribal arts. Perhaps rather than saying that these early weapons “look modern,” we should say that modern art reflects earlier tribal art forms.

Which weapon in the collection do you think has the most interesting form? How would you incorporate the piece into your décor?