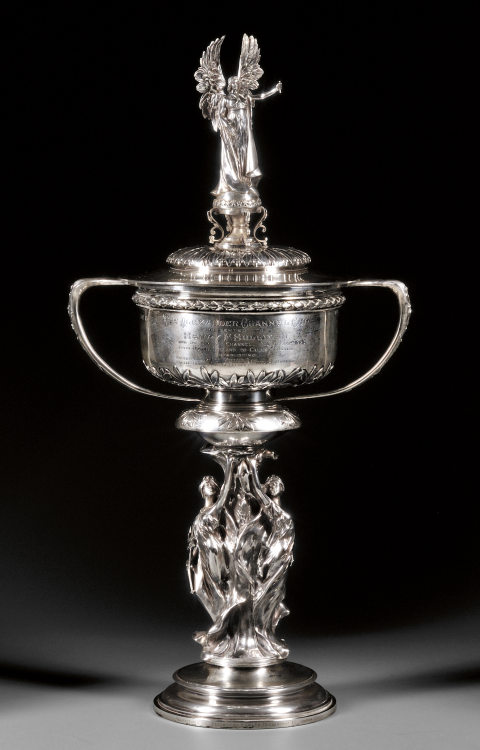 This monumental George V sterling silver trophy made by Elkington & Co. is an intriguing relic of the golden age of achievement, adventure, and historic firsts. Known as “The Alexander Channel Cup,” it is a stunning piece of silversmithing that measures over three feet in height—only 2 feet shorter than me. The trophy was presented to Massachusetts native Henry F. Sullivan in 1923 as a prize for becoming the first American to swim the English Channel. He succeeded on his seventh attempt, a swim that took 26 hours and 50 minutes. His remarkable trophy will be sold on October 14th, 2011 in a Skinner Fine Silver auction.

In this photo, Sullivan looks a little different than the expected fitness star of today’s standards, but it is his “every man” quality that I find compelling. What would drive a Massachusetts man to attempt to swim the English Channel not once, not twice, but SEVEN times? Why would he invest that kind of energy, money, and time? Remember, this was before the age of air travel, so he had to travel by ship across the Atlantic Ocean to England each time he made an attempt. In fact, a newspaper article from the 1940s states that each attempt cost Sullivan close to $5,000. That was a lot of money in the 20s!

Sullivan completed his swim during a time when the western world was fascinated with human achievements, exploration, and pushing the boundaries of the known world. The imperative to “boldly go where no one has gone before” far, far predates Captain Kirk! 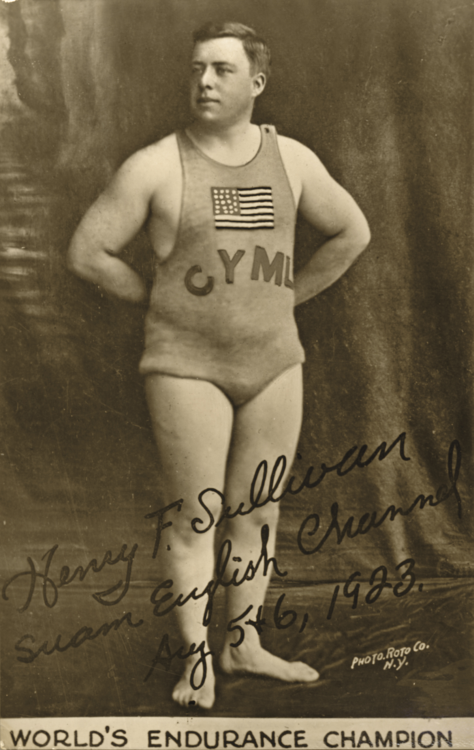 Henry F. Sullivan earned the world record for endurance with his swim across the English Channel that lasted 26 hours and 50 minutes.

Exploration has always been a basic human imperative, but the resources and developments available in the more modern world of the late 19th and early 20th centuries allowed humans to travel farther and attain greater knowledge about the world than ever before. The 19th century saw a boom in the founding of horticultural, cartographic, geographic, and exploration clubs, including the Royal Geographic Society, founded in 1830, and the first Alpine Club in London, founded in London in 1857. Many of these groups encouraged and sponsored research and expeditions.

If there was unexplored wilderness—a mountain top, body of water, rainforest, land of ice, or land of burning sun—there was someone concocting an idea to be the first to see it, describe it, chart it, and conquer it.

Perhaps the most famous examples of striving for first achievements are the early attempts to “conquer” Mount Everest. George Mallory made his first summit attempt on Mt. Everest in 1921, and later died on her slopes along with fellow climber, Andrew “Sandy” Irvine in 1924. During this same era, English explorer Percy Fawcett was attempting to find a mythic city of gold in the inscrutable Amazon basin. It is interesting to point out that Henry Sullivan was making his aquatic attempts during this same period.

Although few may know his name today, Sullivan’s feat made him a sports star in his own day. In Part II of this blog series, Henry F. Sullivan’s English Channel Swim, I’ll describe his swim and his fame in more detail.

If you’d like to view the trophy in person, along with the rest of the Fine Silver auction, feel free to attend the auction previews on Thursday, October 13 from 12 to 8 p.m. or Friday, October 14 from 12 to 4 p.m. (The Friday evening preview continues until 8 p.m. for the European Furniture & Decorative Arts portion of the auction). You can also email me for more information at silver@skinnerinc.com.

One thought on “Exploration, Adventure, and Endurance Part I: How to Earn a Three-foot-tall Sterling Silver Trophy”