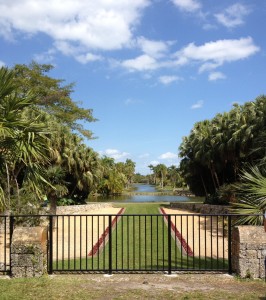 As much of the Northeast is still waiting for the warmth of spring to encourage the tulips and hyacinths to bloom, thought I would share some Florida flora. The Fairchild Tropical Botanic Garden, located in Coral Gables, is a unique, American treasure and a favorite destination for locals and tourists alike.

Fairchild Tropical Botanic Garden is named after one of the most famous plant explorers in history, David Fairchild (1869-1954). Fairchild, known for traveling the world in search of useful plants, was also an educator and scientist. At the age of 22, he created the Section of Foreign Seed and Plant Introduction of the United States Department of Agriculture, and for the next 37 years, he traveled the world in search of plants of potential use to the American people. Fairchild visited every continent in the world (except Antarctica) and brought back hundreds of plants. Dr. Fairchild retired to Miami in 1935 and in 1938 he opened Fairchild Tropical Botanic Garden.

The landscape architect for the gardens was William Lyman Phillips. Born in West Somerville, Massachusetts, Phillips was an early student at Harvard’s Landscape Architecture Program, from which he graduated in 1908. By 1911 he had joined the Olmsted Brothers firm, where he worked on the Boston Common. Fairchild Tropical Botanic Garden is one of Phillips’ best-known works.

Visitors to the gardens can stroll along the paths designed by Phillips and view the many tropical plants and trees that are part of the conservation, preservation and scholarship the garden is so famous for. They can also enjoy the newly opened Butterfly garden.

My favorite spots are dramatic in their contrast.  The rainforest section is home to lush, greenery with abundant foliage and surprise waterfalls and steams, while in another corner of the garden sits the impressive needle-like spines and forbidding plants native to Madagascar.

Installation art seamlessly blends with the landscape throughout the gardens, and includes works by Yoko Ono and Dale Chihuly. The most wonderful aspect of the Fairchild Tropical Botanic Garden is that it is guaranteed to be a little different every time you return.