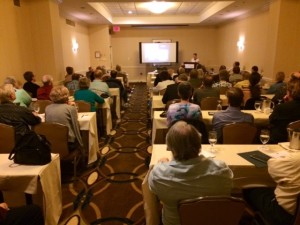 A lecture hall at the Wedgwood International Seminar in Alexandria, VA

The 59th Wedgwood International Seminar (WIS) took place this past weekend in Alexandria, Virginia. The annual event features a variety of speakers on Wedgwood-related topics, discussions, field trips to private collections, and much camaraderie. Dealers can display their wares for sale in a large space called the “Sally’s” room.

Usually held towards the end of April each year, the venue changes annually from city to city across the United States and into Canada and the United Kingdom. The attendees may be singles or couples, academics or casual collectors. Many travel a great distance, from as far away as Australia, Canada, and California, and take extra time to visit attractions around the host city as well. This year, approximately sixty members spent three days and nights at lectures and sharing cocktail parties and meals.

The bulk of Wedgwood International members also participate in regional Wedgwood Societies throughout the year, including societies in Boston, New York, Washington, D.C., Southern California and Queensland, Australia. As a result, the WIS is about more than just Wedgwood; it’s also a reunion for old friends.

Next year’s seminar, the 60th anniversary of the WIS, will take place from April 22-25, 2015 in Birmingham, Alabama, home of the largest collection of Wedgwood under one roof. It should be quite an event! If you’re interested in learning more about Wedgwood, I highly recommend attending. 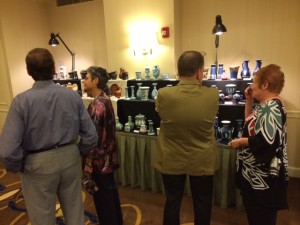 People browse Wedgwood wares on display in the “Sally’s” room 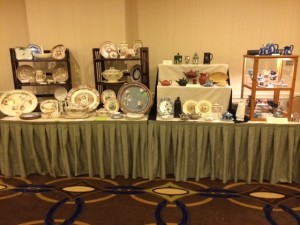 Wedgwood on display at the Wedgwood International Seminar in Alexandria, VA