Last week LaGina Austin, our Director of Appraisal & Auction Services, and I represented Skinner at the 46th Annual Heckerling Institute on Estate Planning in Orlando, Florida. Heckerling is the “Super Bowl” of estate planning conferences, and Skinner has had a booth there for each of the past fifteen years.

In past years we’ve seen our fellow exhibitors raffle off everything from lobster dinners to bottles of champagne to all sorts of electronic gadgetry. We joined the fray this year but decided to do so with a different twist. Our giveaway was an example of the wares we bring to auction regularly: a beautiful piece of modern design in the form of a Tiffany favrile vase offered in our recent 20th Century Design auction. 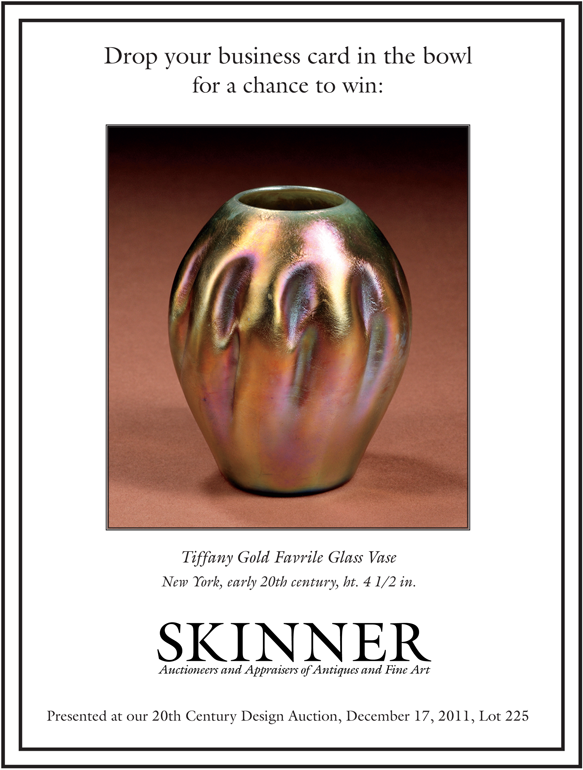 Jane Prentiss, our Director of 20th Century Design, wrote the following comments about the piece and the process by which it was made:

Prior to the turn of the 20th century, Louis Comfort Tiffany’s “Quest of Beauty” led him to develop Tiffany favrile Glass. Hand-wrought, this early glass was called fabrile after the French for “made by hand.” It later became known as “favrile,” as the glass developed a radiance and richness.

One of the most striking characteristics of favrile glass is its iridescence. This is achieved by exposing the glass to metallic fumes while still hot, creating a surface that plays with light. Pulling the hot glass creates the form and undulations on the surface, giving the glass vitality. Timeless in its beauty, Tiffany favrile glass is as highly admired now as ever.

The bottom of this gold iridescent vase is finished with a button pontil. The pontil is a remnant from where the glass rod held the vase while it was being manipulated in the furnace by the glass blower.  The vase carries the L.C.T mark (for Louis Comfort Tiffany) and is numbered 2243. It was created circa 1900 for collectors and lovers of art.

Apparently, there were a number of art lovers and perhaps even collectors at Heckerling this year, as our fishbowl held almost 150 business cards by the end of the conference. Jane Prentiss drew one of them, and the vase is now on the way to its new home with the lucky winner!

Should you be headed to Heckerling next year, please visit our booth – we’re planning to have an equally interesting and beautiful object available as our prize drawing. And if you’re a fan of Tiffany or art glass in general, watch for the catalogue for our next 20th Century Design sale, coming up on June 23rd.