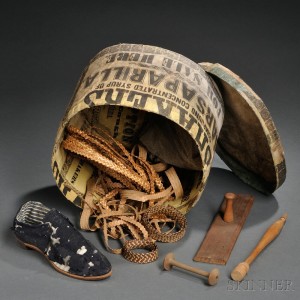 The Andrewses had a keen eye for all things Shaker, but their effort to preserve Shaker ephemera—printed materials designed for short-term use—seems remarkably prescient. During their sweeps through buildings at Mount Lebanon and Watervliet, New York, during the 1920s they saved literally thousands of labels that almost surely would have been otherwise destroyed. As historian Richard M. Kolbet documented in his article “Publish & Perish: Printed Ephemera and Social History”, the conscious collection of printed ephemera in Britain and the United States began in the 1920s with printer Johnn Johnson at Oxford, and collector Bella Landauer in New York.[i] The Andrewses were contemporaries of Johnson and Landauer, and had embarked on a similar mission (though they were likely unaware of the connection) as part of their drive to preserve Shaker culture.

Along with labels, the Andrewses were always glad to find printed materials reused for other practical purposes. The Shakers, and most 19th-century people, regularly reused printed waste sheets to construct all sorts of boxes.  One such box was sold by Faith Andrews in the 1980s and eventually ended up in the collection of M. Stephen and Miriam R. Miller. As Miller described it in Gather Up the Fragments: The Andrews Shaker Collection:

“The box appeared to be made of heavy papers or cardboard with the outside covered in old wallpaper. There was a decided sturdiness and heft to it; it weighed about three pounds. The rectangular body of the box was fitted with an unattached lid, the top of which was initially dome-shaped. By the time I acquired the box the dome had collapsed and was slightly concave. The appeal of the box for me was its interior lining—a collage of broadsides advertising Shakers Pure Lemon Syrup and printed on yellow papers. Since the interior had never been exposed to light, the yellow color was strong and vibrant.”

Miller engaged a paper conservator to carefully disassemble the box, which yielded some remarkable finds, including the earliest known printed Shaker hymn sheets, and some other manuscript hymn and poem texts. Best of all, one intact and three reconstructed examples of the Shaker’s Pure Lemon Syrup broadside were recovered. Miller described these as examples of “the largest and most elaborate Shaker broadside ever produced. Measuring eighteen by twelve inches, it has no fewer than eighteen font styles enclosed inside its elaborate borders.”

In the June 15, 2014 auction of The Andrews Shaker Collection, one object simultaneously illustrates Shaker utility and the Andrewses preservation ethic—which are quite similar as it turns out. Lot 107 (Estimate $6,000 to $8,000) is an excellent example of the accidental preservation of Shaker printing: a pasted-up box covered entirely in broadsides advertising Sarsaparilla, Phthisis Eradicating Syrup, and Vegetable Pulmonary Pills. The contents of the box as found by the Andrewses included a sister’s net cap and shoe, a section of peg-rail, palm leaf bonnet braiding, a duster handle, and spool. Boxes such as this, sometimes referred to as “make-do,” are wonderful instances of the Shakers’ eminent practicality in reusing materials.

The fact that the Andrewses chose to keep this rather motley time capsule intact following its discovery demonstrates their intuitive respect des fonds—a cornerstone of archival philosophy—”respect the original order.” The Shaker who reused these broadsides was making a practical, and frugal, decision to repurpose excess materials in a different way to construct a useful object befitting the Millennial Church. The materials that ended up in it over time were perhaps accidental, and it probably missed a trash-collecting sweep at some point. Serendipitously it ended up in the hands of the Andrewses, who probably purchased, or received it as a gift, from Sister Sadie Neale at New Lebanon (though this is undocumented).

The net result is the survival of an everyday Shaker object that preserves multiple examples of three otherwise unknown Shaker medicinal broadside. These have been repurposed into a box containing the bric-a-brac of Shaker life. In a way that I never quite realized in 2008 when preparing Gather Up the Fragments—this box exemplifies the Andrewses holistic approach to saving Shaker culture. While one would hate to think of this box being deconstructed, it is true that a paper conservator might carefully exhume even more treasures from this object than currently meet the eye.