Lecture by Andrea Mays, Author of The Millionaire and the Bard: Henry Folger’s Obsessive Hunt for Shakespeare’s First Folio 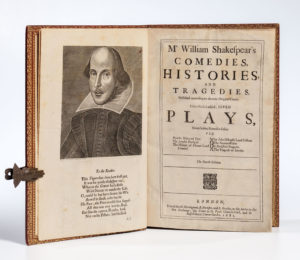 Andrea Mays, author of The Millionaire and the Bard: Henry Folger’s Obsessive Hunt for Shakespeare’s First Folio, will speak about her book, early printing, collecting, and the upcoming Early English Books auction on July 20.

Andrea Mays, like fellow New Yorker Henry Folger, has been possessed by a lifelong obsession with Shakespeare and his times. A former student of Frank McCourt (who chronicled those days in his memoir “Teacher Man”), Andrea spent much of her Manhattan girlhood holed up in the New York Public Library listening to vinyl LP recordings of performances by the Royal Shakespeare Company. Throughout high school, she carried around in her rucksack tattered, paperback copies of the Folger Library editions of Shakespeare’s plays.

Andrea has degrees in economics from the State University of New York at Binghamton and from UCLA, and teaches economics at California State University at Long Beach.  In Washington, D.C., she was a presidential appointee to the U.S. International Trade Commission, where she served as economist to the chairman. She divides her time between California and Washington, where her Gilded Age townhouse, the residence of Daniel Chester French while he sculpted the Lincoln Memorial, stands in the shadow of the Folger Shakespeare Library. The Millionaire and the Bard is her first book.

Please join us to preview the collection in Boston and to hear Mays speak on July 19th—Reception at 5:30PM, lecture to begin at 6PM.