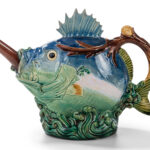 Majolica’s birth to the World in 1851 at an exhibition held at London’s Crystal Palace is credited to the Frenchman Léon Arnoux and his work at Minton. It is defined by its rich use of lead glazed enamel colors combined with its strong modeling in the Victorian taste. Certainly, inspired by their Renaissance predecessors though fundamentally different than the earlier tin glazed earthenware.

Minton was a firm at the forefront of manufacture along with Wedgwood, George Jones, Joseph Holdcroft, Thomas Forester, and numerous others.… Read More 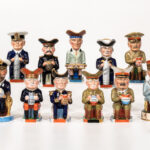 The toby jug has been a novelty in English pottery for over 250 years. The term toby jug refers to a pottery tankard in the form of a seated figure or the head of a famous person. The first of these were produced in the 1760’s by various potters including Ralph Wood I of Burslem, Thomas Whieldon of Fenton and John Astbury of Shelton. The quality of modeling and use of translucent underglaze enamels are quite evident in these examples.

The source of the name “toby” is uncertain though there are multiple theories.… Read More 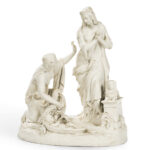 Parian ware is a type of porcelain produced to imitate carved marble. As it could be cast and molded, the material was ideal for mass production at a scale and cost not possible with carved stone. Unglazed white bisque porcelain was popular in the late 18th century at the Sevres factory in France and Derby in England, each producing very sophisticated bisque figural groups.… Read More 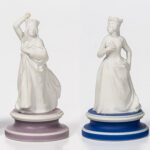 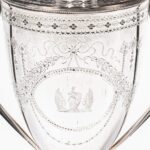 Hester Bateman (1708–1794) is considered one of England’s most successful woman silversmiths of the late eighteenth century due to her entrepreneurial acumen. From a poor background and no formal education, she married the goldsmith and chain maker John Bateman at 24. Upon his passing in 1760, the widowed Hester took over the shop, registering at London’s Goldsmiths’ Hall on April 16, 1761 with the first of her nine ‘HB’ marks.

Over the next 30 years, along with her sons, Jonathan and Peter, and daughter-in-law Ann, Hester Bateman built up the family business using thin gauge sheet silver, specializing in household silver.… Read More 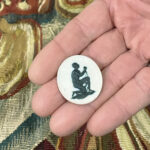 Josiah Wedgwood, the English potter, was an original member of the Lunar Society, a group of prominent figures in the Midlands, including industrialists, natural philosophers, and intellectuals. Matthew Boulton, Erasmus Darwin, Joseph Priestley, and the author and abolitionist Thomas Day were members of the social club formed to discuss issues with other like-minded individuals.

In 1773 Thomas Day wrote the epic poem The Dying Negro, which may have been partly responsible for arousing Josiah’s practical opposition to the slave trade.… Read More 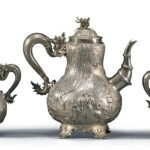 Following a blossoming of interest in the 1960s, Chinese export silver has never been more collectible than it is today. The demographics of the market, however, have changed. The days of American collectors ruling the roost has given way to Chinese collectors, demonstrating their willingness to out-pay and outbid all others.… Read More 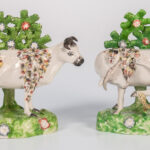 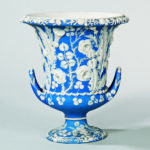 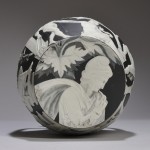 One of the most famous surviving Roman works of art, The Portland Vase, is a fused glass vase and was believed to have been made during the reign of Augustus, sometime between 27 BC and AD 14. It consists of two layers, a dark blue overlaid with a soft white. The relief was cameo cut by gem engravers of the highest order and is considered a masterpiece of its kind. At some point the base was damaged and an additional disc was added showing a portrait of a man wearing a Phrygian cap.… Read More