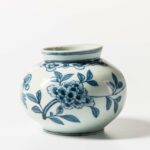 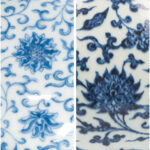 Chinese blue and white porcelain has an appealing charm that has long been recognized among art collectors and ceramics aficionados. Many elements contribute to this, but the most prominent would be the cobalt blue color. In China, the use of blue pigment on ceramics began as early as the late Tang dynasty. Still, it was not until the late Yuan dynasty that blue and white Chinese porcelain gained popularity, and production started in sizable quantities.… Read More 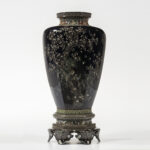 Japanese cloisonné uses an ancient enameling technique originating in the West during the Middle Ages. The term cloisonné comes from the French cloison, meaning partition or segments, and refers to a form of decoration in which metal strips or wires are applied to a surface in closed shapes. Glass or enamel are melted into each partitioned area to create an elegant, jewel-like decoration. Initially, cloisonné adorned small portions of jewelry and metal accessories.… Read More 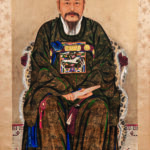 Portrait paintings are prevalent in Korea, especially during the Joseon period (1392-1897). Kings, sadaebu intellectuals, loyal vassals, elders and ancestors, monks, and even notable women were portrayed often with representative belongings to characterize the depicted. The Joseon society treated such portraits as persons incarnate; works enshrined in sacred places such as ancestral shrines and temple halls to worship, pay respect, or reminisce.… Read More 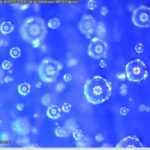 Chinese monochrome-glazed ceramics have been attracting western collectors since the 18th century. The collecting frenzy was ignited by the French and soon followed by the Americans of the Gilded Age. For the immensely varied hues spanning the whole color spectrum from white to black, monochrome ceramics were collected and used as a vibrant design element to decorate their chateaux, mansions, and hotels. Many terms have been coined to indicate the Chinese glazes, such as ‘ding ware’ for the creamy white; ‘blanc-de-Chine’ for the ivory white; ‘celadon’ for the grayish-green; ‘sang-de-boeuf’ for the deep red; ‘peachbloom’ for the soft pastel pink; ‘clair-de-lune’ for the delicate pale blue; and ‘Imperial yellow’ for the egg-yolk yellow; to list a few.… Read More 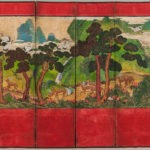 Popular in Korea, folding screens were created to decorate rooms and for use as a backdrop to enhance the festive mood for special events such as weddings, birthdays and holidays. Adorned with symbolic images with auspicious meaning folding screens have long been loved; and more recently become a study subject among art historians, who see them essential in understanding Korean art and culture of the late Joseon period. 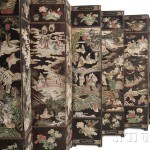 Skinner is privileged to offer a monumental twelve-panel Coromandel kuancai lacquer screen (Lot 523) on March 19 at the Asian Works of Art auction in Boston. More than 8 feet high and 21 feet wide, the screen is majestic in appearance and awe-inspiring for it’s complexity in composition as well as it’s precision in depicting mythological scenes with numerous immortal deities and all varieties of flora and fauna. Such themes in meticulous details on giant lacquer screens were in fashion and widely popular during the Kangxi period (1661-1772) in China.… Read More 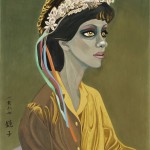 One Of Many Paintings Portraying Beautiful Women

Skinner is privileged to offer the portrait, “A Black Woman in Atlanta” painted by the Korean female artist Chun Kyungja (b. 1924). It is estimated to sell at auction for $650,000-700,000, and will be offered on Saturday, September 19th at the Asian Works of Art Auction at Skinner in Boston. Less known to the Western world, she has been highly recognized in Korea as one of the most important figures in that nation’s art scene.… Read More