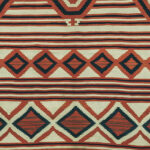 The classic serape was the culmination of a century and a half of progress and growth in Navaho textile tradition. The Navajo learned to weave during the latter part of the 17th century from the Pueblos, who had been weaving cotton and other fabrics for hundreds of years. When the Spanish settled in the Southwest (from 1598) they introduced European treadle looms, Churro sheep to supply wool, and blue indigo dye. Churro wool and indigo blue soon became a part of the Pueblo weaving tradition.… Read More 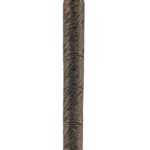