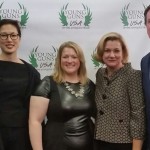 As we come to the end of another year, I’d like to introduce a young star in the antique world. Meet Margaret Schwartz. She is the recipient of the first Antiques Young Gun of the Year Award, which was announced recently at the opening of the Pier Antiques Show in New York City. This award recognizes the Young Gun who stands above the rest in categories such as career development, industry vision, and social media involvement. The winner received a prize package valued at more than $10,000.… Read More