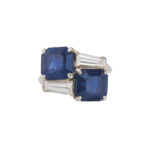 You may have seen some incredible auction prices for sapphires from the fabled Kashmir mines in recent years. Could that sapphire ring in your jewelry box possibly be one? First, a bit of a background on these sought-after stones. In 1881 in the Zanskar Range of the Himalayas, a landslide revealed a remarkable deposit of sapphires. These sapphires had a unique velvety cornflower blue appearance and were brighter than other stones. Mining began in 1882 and continued until 1887 when the mine was depleted.… Read More

Diamonds, specifically diamond rings, are among the most popular pieces that we sell in the Fine Jewelry department. Purchased for significant occasions; buyers want the “perfect” stone. The internet is full of information, which can sometimes be overwhelming. Here are the five crucial things to keep in mind when purchasing a diamond.

The diamond color grading scale progresses from D-Z. D-F color diamonds are what we call “colorless,” which means they have the least amount of yellow or brown tones.… Read More 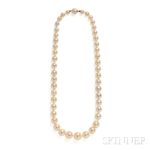 Pearls are always in fashion, and natural pearls always draw the most attention. Lately, natural pearls in great condition have performed very well at auction, and I feel that the trend may have peaked.

To most people the Victorian Era is known for the industrial revolution, social reform, and the Pax Britannica. For me, all those run a distant second to the Victorians greatest achievement: earring design. Victorian earrings are everything that I love about antique jewelry. Here are the three reasons why:

Victorians were endlessly inventive with their design motifs. If you can think of a subject matter, I could probably find you a pair of Victorian earrings.… Read More 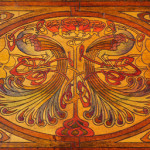 The Irish Arts & Crafts movement often does not get the attention it deserves in publications and exhibitions. That is why it was particularly exciting to visit the Making It Irish exhibition at the McMullen Museum of Art at Boston College over the weekend. The curators have brought together over 150 objects, including textiles, metalwork, glass, furniture, books, and jewelry, to examine the movement in the context of the enormous social and political upheavals that characterized Ireland in the late 19th and early 20th centuries.… Read More 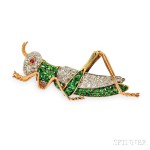 Some of the most beautiful gems in the world came from the Ural Mountains of Russia in the 1800s. Emeralds, sapphires, topaz, alexandrite, malachite, and amethysts of unmatched quality were mined under the Czar’s direction. Many made their way to the palaces and imperial jeweler Carl Fabergé, others were sent to the best jewelers in Europe and the United States. In 1868, the Russian miners discovered the most distinctive, and in my opinion the most beautiful, stones in the Urals:  demantoid garnets.… Read More 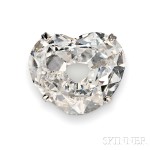 When French gem merchant Jean-Baptiste Tavernier first visited the Golconda diamond mines of India in the 17th century, the stones he saw there were unlike anything he had ever encountered. The diamonds had a special quality that he described as “gems of the finest water” in reference to their incredible limpidity. The diamonds that Tavernier purchased quickly made their way to the collection of Louis XIV, who incorporated them into the French crown jewels.… Read More