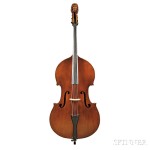 In a somewhat rare event, Skinner is pleased to offer two outstanding double basses in the upcoming April 13, 2014 Fine Musical Instruments auction. One bass is ascribed to Auguste Sebastien Philippe Bernardel and the other is made by Gragnani. They are accompanied by two wonderful double bass bows.

Auguste Sebastien Philippe Bernardel was born in 1798 in Mirecourt and died in 1870 in Bougival. A gifted maker, he was one of three giants among the French makers of the eighteenth and nineteenth centuries alongside Lupot and Vuillaume.… Read More 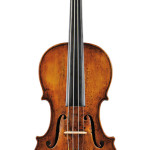 Dom Nicolaus Amati: a fine and unique violin maker, to be sure. But was he an Amati? No. Who was he really then, and why the Amati name?

Dom Nicolaus Amati is none other than Nicola Marchioni, born in 1662 in Bologna. He entered the priesthood in 1687 and was also a violin maker, though historians don’t know who trained him. He pursued these two careers simultaneously.

It has been said that Marchioni took the Amati name for his craft because of its fine reputation.… Read More 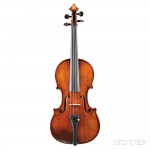 As a violin-maker, I automatically think of the Gagliano family whenever I think of Naples, Italy. Beginning as far back as 1640 with Alessandro Gagliano and ending with Vincenzo Gagliano in the early 1900s, the family produced a remarkable number of fine violins, violas, and cellos. The most prominent personalities of the family, Alessandro, Nicolaus, and Gennaro, emerge in the more important works that bear the Gagliano label.

When you think of Piedmont, Italy the first thing that comes to mind is most likely wine. Yes, Piedmont is a wine region, but it was also home to an important tradition of violin-making. The Piedmont school can be divided into three distinct periods, beginning in 1630 with the most important maker of his time: Chioffredo Cappa.

The Guadagnini family dominates the second period. Giovanni Battista Guadagnini arrived in the region in 1771 and introduced violin-making in the Lombard manner.… Read More 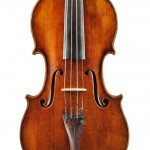 Giovanni Francesco Pressenda was perhaps the most important Italian violin maker of the 19th century and certainly is considered among the very best of the Turin school. He entered the field shortly after the Guadagnini family brought violin making to the very highest level, and picked up a thorough understanding of this knowledge.

After apprenticeships with several French violin makers, including Leté-Pillement, he established his own firm in Turin in 1820, the same year that this instrument was made.… Read More