Provenance: Julia and Richard H. Rush (1915-2011),North Fort Myers, Florida (date unknown); by gift to the present collection, 1958. Property of the Hood Museum of Art, Dartmouth College. Sold for the benefit of the collection.

N.B. This exciting and unusual scene shows the mythological Greek hero Jason about to capture the Golden Fleece which hangs from a branch on the tree on the left, a fierce dragon coiled at its base. Jason, whose vessel the Argo is seen in the background on the right, was charged to capture the Golden Fleece from Aeëtes, King of Colchis. Aeëtes promised to give it to Jason only if he could perform three fearsome, seemingly impossible tasks. The figure group on the left seems to represent Medea with her attendants. The sorceress Medea was the daughter of Aeëtes, who defied her father and used her magic to aid Jason in his quests, then fled with him to Greece. The dramatic moment captured here is the third and final hurdle, to overcome a sleepless dragon which guarded the Golden Fleece. Jason subdued the dragon with a potion, given by Medea, distilled from herbs. The dragon fell asleep, and Jason was able to seize the Golden Fleece.
Estimate $30,000-50,000

The painting was reviewed via high-resolution images by experts at the RKD, who offered these thoughts:

"First of all, there is no reference to your painting in our databases or our documentation. Your painting is also not mentioned in the Hofstede de Groot index cards.

There are all together very few painted examples of this subject. The scene of Jason and the Golden Fleece was rarely depicted by Dutch and Flemish painters. The fact that your painting was painted on such a large format suggests an important commission, perhaps by a foreign patron. The architecture in the background might give some clues to that, but more research is necessary to identify the building.

One of the few examples of depictions of Jason and the Golden Fleece is the painting made for the Torre de la Parade, painted by Erasmus Quellinus (https://rkd.nl/explore/images/248145) after the design by Rubens (https://rkd.nl/explore/images/248146). The depicted scene is however different from yours: Rubens does not represent the myth as it is told by Ovid, where Jason puts the dragon to sleep near the tree with the Golden Fleece (as in your painting),but he follows the version of Hyginus, according to which the fleece hung in the temple of Mars (see Svetlana Alpers, Corpus Rubenianum 9, no. 34 and 34a). There are similarities in the Fleece, especially the posture and overall look, but it is clearly painted by a different hand. The full armor of Jason in your painting appears more contemporary than the Roman attire of Jason in the Torre de la Parada.

Judging from the photographs, especially the colors and the brush style, I think your attribution to the studio of Rubens is reasonable. Also the fact that that the painter used the antique statue of the Apollo Belvedere for the pose of the main figure fits with what one would expect from Rubens. I also agree with your evaluation of the painting being painted by (at least) two different hands. The figure of Jason was clearly reserved in the landscape, what we can see in the ground layers exposed around the figure...

I do have an interesting fact to share regarding your attribution of the landscape to Jan Wildens. In the probate inventory made up after the death of Jan Wildens' son, Jeremias Wildens, we find listed "Op de Schilderscamer" ['in the painters room', that is the workshop] the following painting: "Een groot onvolmaeckt stuck wesende eenen Jason" [A large unfinished piece representing Jason] (Erik Duverger, Antwerpse Kunstinventarissen 6, p. 486, no. 311). It is one of only two paintings with this subject that Duverger found in his archival research in Antwerp; the other was mentioned without a painters' name. The fact that it is listed as unfinished and that the painting was found in the workshop suggests it was either painted by Jan Wildens and/or Jeremias Wildens. Both died in the last months of 1653. The painting listed in the inventory was presumably finished by another painter. Could it be identical to your painting?" 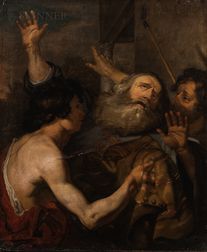 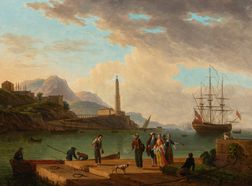 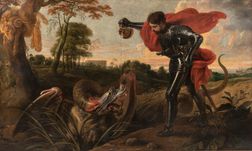 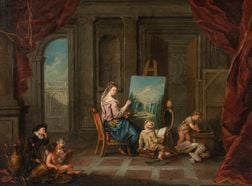 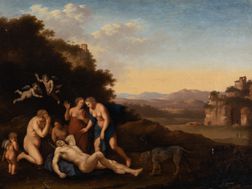 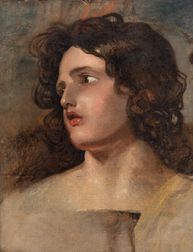 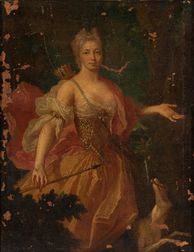 French School, 18th Century Portrait of a Lady as Diana the Huntress