N.B. Rauschenberg created a group of eight wooden panels in exchange for a property in Captiva Island, Florida, owned by Joseph Van Vleck. Van Vleck and his wife, Louise, along with Van Vleck's six children from previous marriages, resided on an adjacent property, and Rauschenberg conceived each panel as a representation of a different member of the family. Contemporaneous with Rauschenberg's Spreads series (1975-83) and sharing similar techniques and materials with those larger-scale works, the Van Vleck Series paintings originally hung together in a continuous installation as intended by the artist; however, each panel serves as an individual portrait, and Van Vleck gifted each child his or hers. This example includes imagery transferred and/or collaged from publications and magazines including Sports Illustrated.

Joseph Van Vleck, in a letter dated Sept. 25, 1979, wrote about the paintings: "I think what Rauschenberg is doing in each of the eight paintings is to assemble images helping the observer to think of his own life, other forms of life, —yes, and non-life—which surround him. And also to think of movement or travel, work and play, and other forms of activity in a full life. We sense the artist's ideas of what attracts human attention and sometimes holds it, influencing attitudes and behavior.... Imperfections appear in the use of solvent transfer of images. At first, I was critical—why, I asked, does such an able artist tolerate such vague images? Then. I thought of the many things during my life that I have only half seen. And I thought of what I once knew well, and now cannot recall. Blurred images disturb me no longer!"

Rauschenberg, in a handwritten statement about the series dated March 11, 1981, wrote: "I thought of the commissioned series of collage paintings that I made for the Van Vleck Family as a group of abstract portraits each with the family unification and restrictions and each with the uniquness [sic] and couriosity [sic] of the chosen individual in the choosing. With the radical differences hopefully and the blood calm as security each subject would have to recognize his own likeness, and maybe change." (Robert Rauschenberg papers. Robert Rauschenberg Foundation Archives, New York.)

We would like to thank the Robert Rauschenberg Foundation for their kind assistance in cataloguing this work.
Estimate $60,000-80,000 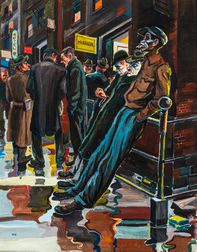 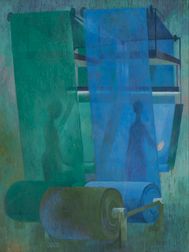 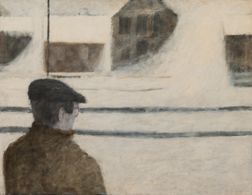 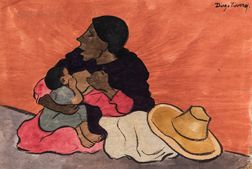 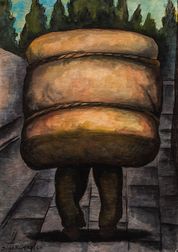