The Entrance to the Jeddo River
Signed and dated "C.Wimar.1851." l.r., identified on a label from the St. Louis Art Museum affixed to the frame backing board.
Oil on canvas, 29 1/4 x 36 in. (74.0 x 91.5 cm),framed.
Condition: Lined, new stretcher, fine stable craquelure, retouch primarily to the edges of the composition with one spot in the sky at c.l.

Provenance: Collection of Charles C. Crecelius, St. Louis, Missouri, by 1908; by descent to Frances M. Crecelius, St. Louis, Missouri; Parke-Bernet Galleries, February 13, 1954, Sale 1493, Lot 21, from a Missouri private collector; purchased from the above by M. Knoedler & Co., New York, 1954; purchased from the above by the Saint Louis Art Museum, 1954; Property of the Saint Louis Art Museum, sold to benefit the Acquisition Fund.

N.B. The fanciful scene depicted here may depict the entrance to the Edo River in Japan, which empties into Tokyo Bay. The composition is thought to be based on a print or a compilation of prints, but the source has not yet been documented. Jeddo is the Anglicized word for Edo, now Tokyo. The change from Edo to Tokyo took place in 1868 at the end of the Tokugawa Shogunate, suggesting that the painting was likely named during Wimar's lifetime, if not by the artist himself.

Looking strictly at the landscape, it has been noted by Asian specialists at Skinner that the terrain seems more typical of a Chinese scene and could even have been influenced by China Trade Paintings. The perspective view, however, can be found in Japanese woodblock prints such as Hiroshige's views of the steep canyons of the Fuji River. 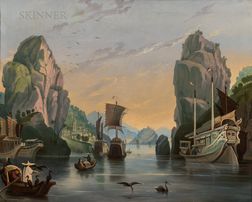 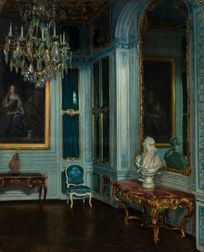 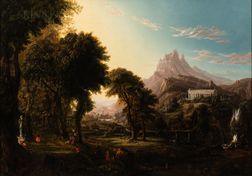 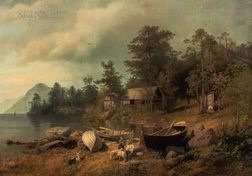