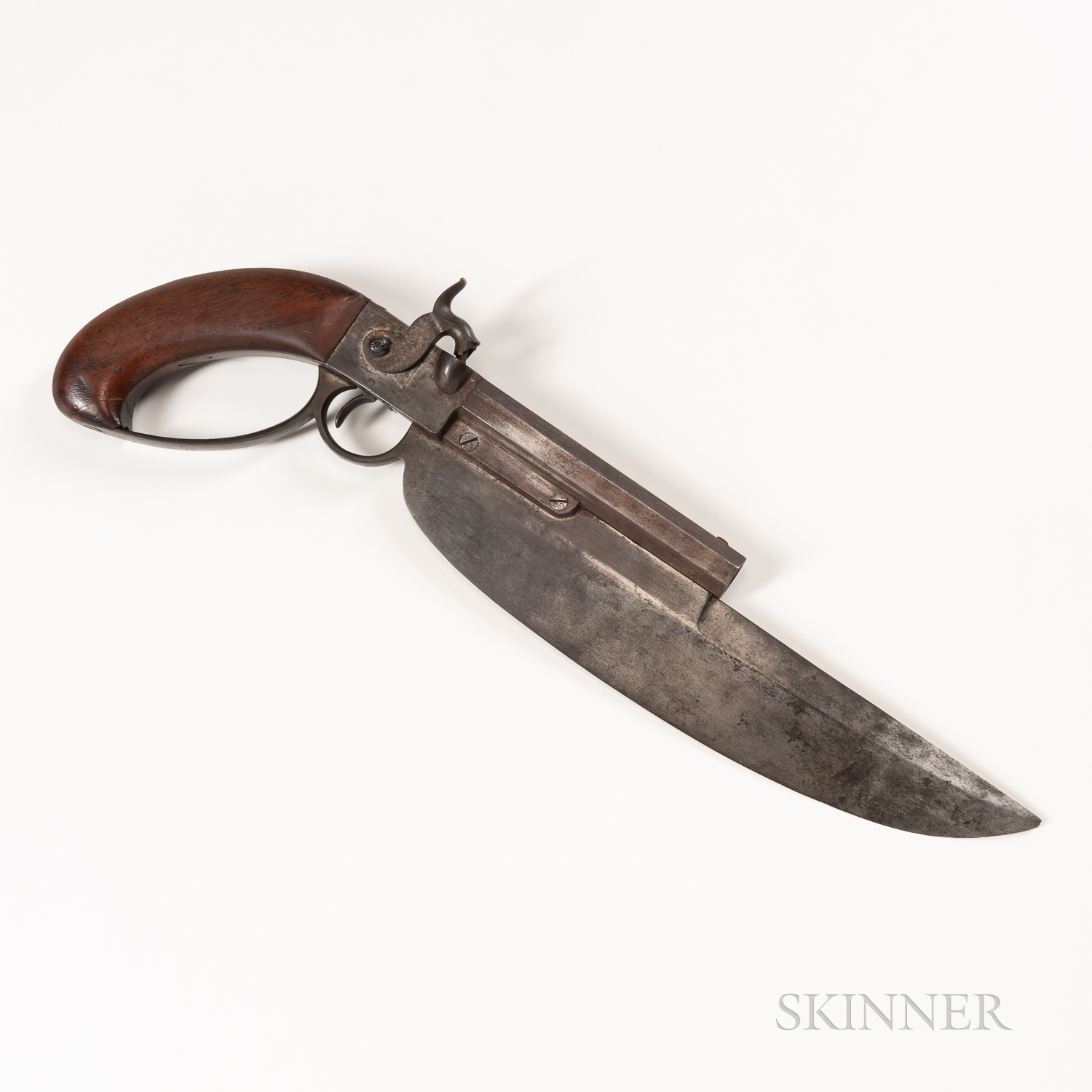 Rare Cyrus B. Allen Elgin Patent Cutlass Pistol with Original Holster/Scabbard, Springfield, Massachusetts, 1837, serial number 34, 5 in., .54 caliber octagonal barrel with narrow brass sight, long Bowie knife-style blade and integral trigger guard mounted below, the lock with plain hammer, arched walnut grip, the top of the barrel stamped "ELGINS/PATENT" and "CBA/PM/1837" at the breech, the left side of the frame marked "C.B. ALLEN/SPRINGFIELD/MASS.," serial numbers located on the left side of the barrel at the breech, on the frame, on the left side of the blade at the rear, on the two barrel retaining screws, and on the upper surface of the side plate beneath the top plate; surviving with the pistol is the original holster/scabbard retaining the German silver throat and most of the leather body, blade lg. 11 1/2, overall lg. 17 in.

Note: The inventor of this unique weapon, New Yorker George Elgin, took advantage of the popularity of the famous "Bowie" knife, envisioning a new style combination firearm and edged weapon that would prove effective in close combat. On July 5th, 1837, Elgin was granted United States Patent No. 254 for his "Improvement in the Pistol Knife or Cutlass." On September 8th, 1837, he wrote to the United States Navy Department proposing to deliver by October 25th 150 "Pistol Knives" for use in a planned expedition to explore the South Seas. The Navy accepted Elgin's proposal and with it was born the United States military's first official percussion handgun. Cyrus B. Allen produced 150 of these pistols for the U.S. Navy. The Bowie knife-style blades were produced by Nathaniel P. Ames.

The cost of the Elgin Patent Cutlass Pistol made by Allen was $17.50. Each was delivered with a German silver-mounted leather holster/scabbard that incorporated a brass-tipped rammer, cleaning equipment, three spare percussion cap nipples, and a storage box.

The United States Exploring Expedition to the South Seas spanned the years 1838-1842. The expedition was composed of five U.S. Navy ships and 350 men, including sailors, naturalists, botanists, a mineralogist, a taxidermist, and a philologist. During the four years of the voyage the expedition surveyed over 200 South Pacific islands and made the first sightings of Antarctica. Scientists on the expedition collected over 60,000 plant and bird specimens; many of which served as the basis for the Smithsonian Institution's earliest natural history collections.

The expedition occasionally found itself in conflict with Native peoples and the published narrative of the expedition documents that the cutlass pistol saw use during the voyage. On the Island of Malolo in Fiji on July 24th, 1840, members of a landing party were attacked by Natives and Midshipman Wilkes Henry pursued an islander and "cut him down with his bowie-knife pistol." In another instance when the expedition was exploring the Sacramento River, an Indian "boldly seized the bowie-knife-pistol of Dr. Pickering," a naturalist, and ran into the woods.

Upon the expedition's return to the United States in 1842 the pistols went into Navy stores. Five years later it is possible that some of these pistols went on the U.S. Navy's Dead Sea Expedition of 1847 as included in the list of armaments taken on the expedition are fourteen pistols including "four revolving and ten with bowie-knife blades attached." Sources suggest that some Elgin Patent Cutlass Pistols remained in the U.S. Navy inventory until the 1860s and that some may have been used during the Civil War.
Estimate $15,000-25,000

Metal varies from a mottled gray to gray/brown with only tiny scattered spots of surface oxidation with virtually no underlying pitting, there is surface oxidation on and around the nipple and adjacent area of the frame, action is smooth, mainspring is strong, forward edge of cock where it surrounds the nipple has a loss, tip of blade has a tiny loss, grip has scattered minor dings and dents and an old reglued chip at the base where the grip joins the knuckle bow on the right side; holster/scabbard metal has thin oxidation and a few minor scratches, leather surface is degraded and stitching is missing, but leather remains securely attached to the mount, tip is missing as is the cleaning rod. 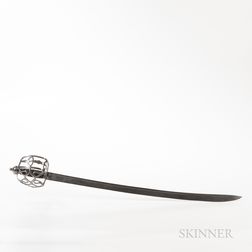 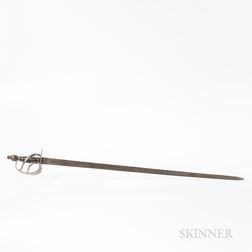 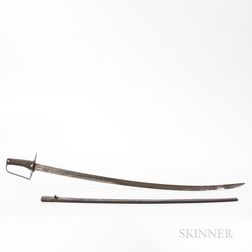 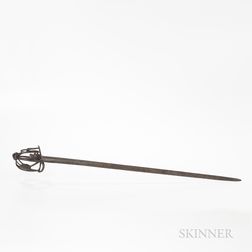 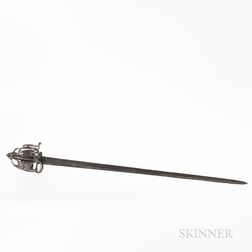 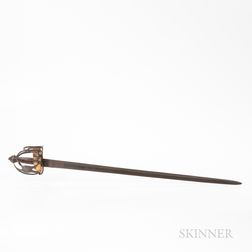