Four Ancient Coins of Three Kingdoms, from Corinthia, Corinth is a 4th century BC Silver Stater featuring Pegasus and Athena, weighing at 8.49 grams and graded by NGC as Extremely Fine with additional notes on Strike: 4/5 and Surface: 5/5, and certificate number 5768623-002; from the Kingdom of Macedon showcasing Alexander III of 336 BC to 323 BC is a Silver Tetradrachm issued of Seleceus I, graded Very Fine by NGC with certificate number 4286400-001, contained in an extra-thick holder; also from Macedon but minted between 187 BC and 168 BC is a coin with Poseidon on the obverse, a club on the reverse, and a serrated edge, and has been graded as Choice Very Fine by NGC with certificate number 4284600-012; and from the Ptolemaic Kingdom under Ptolemy X is a Silver Tetradrachm minted between 107 BC and 88 BC and weighing 13.83 grams, showing Ptolemy I on the obverse and an eagle on the reverse, graded Extremely Fine by NGC with a 5/5 Strike and a 4/5 Surface, certificate number 5768623-003.
Estimate $200-400 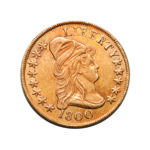 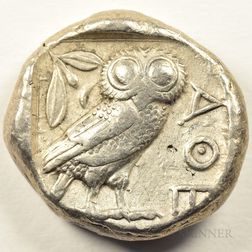 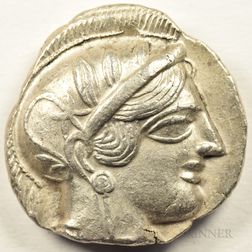 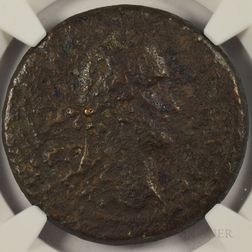