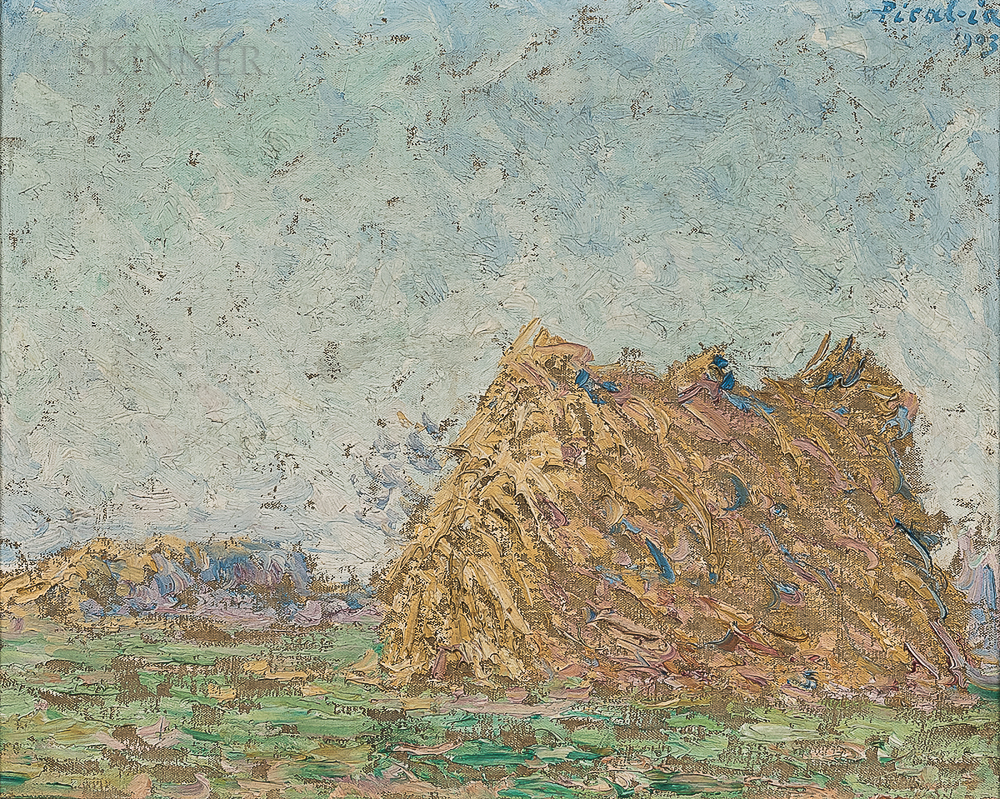 Provenance: Acquired directly from the artist by the grandfather of Louise T. Park; by family descent to the current private collection, Connecticut.

N.B. Though he is most often associated with Dadaism and abstraction, Francis Picabia first found success with paintings done in an Impressionist style. His depictions of the French countryside followed suit with the prevailing Impressionist aesthetic at the turn of the century, taking particular inspiration from the work of Claude Monet, Camille Pissarro, and Alfred Sisley. This 1903 example recalls Monet's 1890-91 haystack series. Rather than Monet's Giverny, Picabia found his haystacks in Moret-sur-Loing, a medieval village situated on the banks of the Loing river and on the edge of the forest of Fontainebleau, southeast of Paris—a favorite destination of Sisley. Instead of painting en plein air in the traditional Impressionist fashion, Picabia often devised his scenes of rural France from photographs or even printed postcard reproductions of works by other artists. Both the divergence from group ideology and the use of appropriation would remain central to Picabia's artistic practice throughout his career. Though Picabia's Impressionist oeuvre achieved critical acclaim and commercial success, by 1909 he had transitioned to Neo-Impressionism, then to Fauvism. He continued this trajectory of exploration and evolution, contributing to Cubism, Surrealism, and the Dada movement, all the while maintaining his independence and defying categorization.
Estimate $30,000-40,000

Additional inscriptions on the stretcher include "Property of Howard Gray Park III" and "1878/1953". The artist's obituary and another clipping regarding the artist are affixed to the stretcher, along with a ticket/invitation to the opening for the exhibition Francis Picabia at the Solomon R. Guggenheim Museum, New York, September 17, 1970.