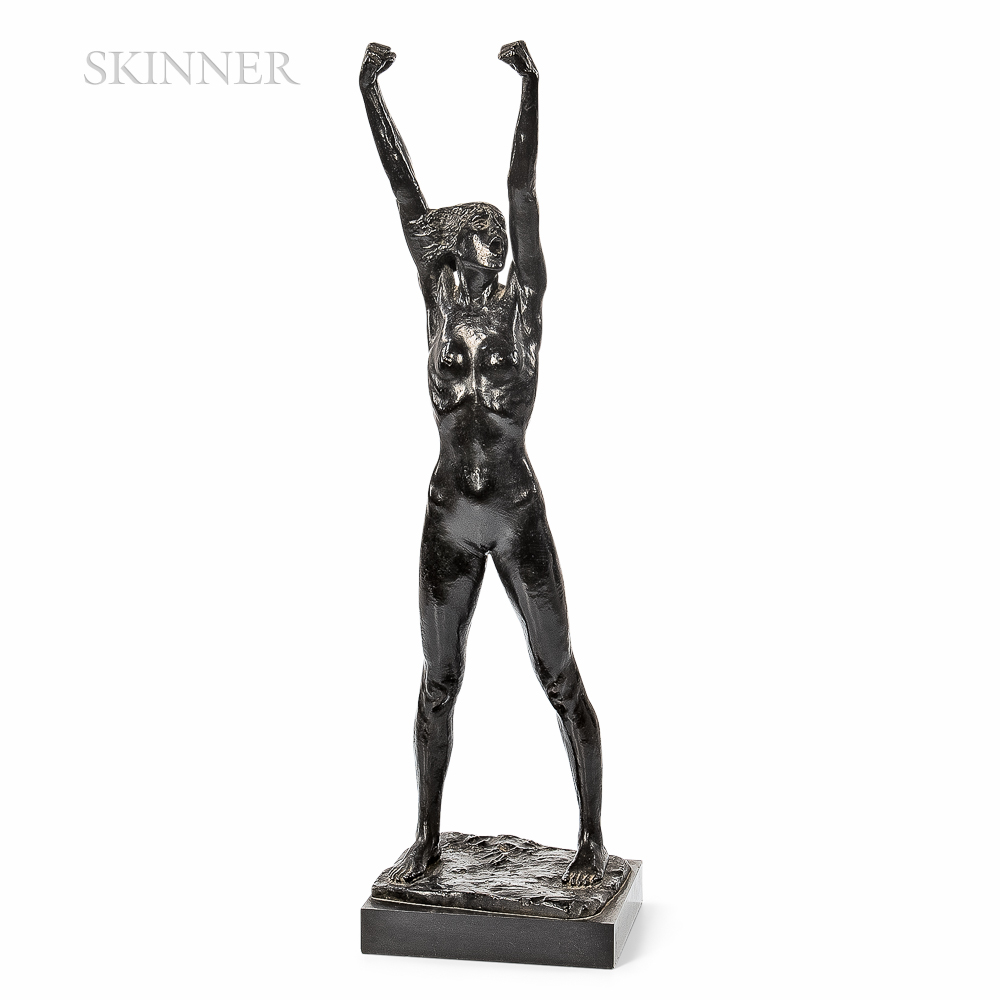 France Aroused, A Study or Maquette
Signed and dated "Jo Davidson/N.Y. 1917" in the bronze by the figure's right heel, stamped "CIRE/C.VALSUANI/PERDUE" by the figure's left heel.
Bronze with dark brown patina, height 29 in. (73.7 cm), on a black stone plinth.
Condition: Minor abrasions and surface imperfections, dust and dirt to interstices.

N.B. We would like to thank the Estate of Jo Davidson, courtesy of Conner-Rosenkranz, New York, for their kind assistance with cataloging this lot.

Born in New York's Lower East Side to Russian émigré parents, Jo Davidson attended Yale University. His family urged him to pursue a career in medicine, but he was drawn instead to art which had been his passion since childhood. He left Yale in 1903 to continue study at the Art Students League in New York. Following that, in 1907, he enrolled in the Ecole des Beaux Arts in Paris, a city that would have a profound impact on his career. In Paris Davidson met Gertrude Vanderbilt Whitney, who became his patron and friend, buying his work and helping secure studio space for the young artist back in New York. He also joined the Paris circle of Gertrude Stein, whom he would later portray in bronze. During his career, Davidson was commissioned by many major figures in politics, business, and the arts and letters of the 20th century. The portraits are not overly polished pieces but express the personalities of the "sitters," that word placed in quotes because apparently the artist did not like to have his subjects sit. Forgoing traditional poses, Davidson preferred his subjects to be animated in some way, and if forced to work from photographs, the artist often requested film clips.

The work at hand is a maquette or a perhaps study for Davidson's figure France Aroused. Davidson, who split his time between New York and France, had a strong reaction to WWI and was eager to help. Through connections he was able to secure a position as artist correspondent for the Daily Mail and the Times which gave him a clearer and more up-close picture of the war than he wanted. He recalls in his autobiography Between Sittings, "Upon my return to Ceret, I was heartsick. It was obvious that the war was going to last a long time. I felt I wanted to express in clay the intensity of the protest of the people. I went to work on a frieze, a bas relief, of the escaping refugees I had seen along the roads. I also worked on a figure which I called L'Appel aux Armes which was later to be called France Aroused. It was a figure of Bellona, the goddess of war, with her feet squarely planted on the ground, her arms upraised, fists clenched, head thrown back, - a cry of rage and protest." (1)

Work on the sculpture continued back in New York, and the artist, at age 33, believed this would be his magnum opus. In an article for Vanity Fair in September, 1917, Pemberton Clarke described the "20-foot-high sculpture" in the artist's studio on McDougal Alley as the personification of the resilient energy and righteous wrath of the French people in the face of the German attack. "France Belligerent," as Clarke dubbed it, commemorated the French repulsing of the German advance at the Battle of the Marne and gave physical form to the strength of spirit of the nation at arms. Asserting that "No more vigorous or vitalized spirit is handling the chisel in our country today," Clarke went on to describe Jo Davidson as "one of the most important of the younger pillars of the temple of American Art" and expressed the desire of the magazine to head any subscription list for the purchase and erection of the monument. Despite this glowing review and generous offer, the monument was never realized. Plans had been made by Mrs. William Astor Chanler and the French Heroes Lafayette Memorial Fund to organize a Spirit of France Committee to raise funds for a 20-foot figure to be erected on the battlefield of the Marne. However, when a plaster cast of the nine-foot sculpture was shown at the Newport Art Association, reaction was decidedly mixed, and the negative criticism was vehement. The artist noted with regret that funding evaporated along with public enthusiasm for the project. (2)

The bronze is affixed to the plinth at a deliberate angle, so that part of the bronze base extends slightly over the plinth in the back. Height of the plinth is 1 5/8 in.